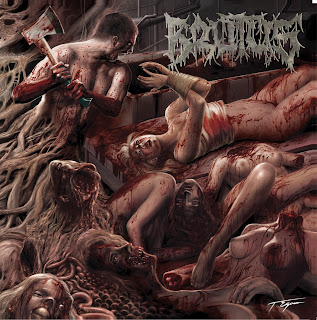 The second full-length from Dutch brutal death metallers Brutus comes off as one of the most ferocious and unrelenting examples of the genre despite the decade-plus absence by the band. Utterly filled with tight, utterly raging tempos and full-throttle paces here, this is much more of a speed-driven brutal death metal offering ferocious riff-patterns that are truly demonic and feral as the unrelenting nature of the material comes out in full-force to make this an exceptionally explosive blast. Firing off explosive rhythm work here with technically-complex riffing and furious razor-wire patterns,it merely completes the more furious and blasting-heavy style on display with this one not only being so fast and savage in it’s tempos but also managing to incorporate enough precision-filled dynamics into the songwriting to keep things interesting beyond just the formulaic barbarian punishment doled out here. Also managing to feature just feral drumming and savage inhuman growling into the mixture, this manages to become quite an enjoyable effort. Right off the bat, though, one does manage to come across one of the album’s few weak points as there’s the feeling here that too much material is packed onto this release. This is especially true with several of the short, brief instrumentals on here that do tend to run this along to the point of overload by getting a breather in on a style of music that by definition really shouldn’t offer one. Likewise, for redundancy sake there’s no need to have this many original songs on the record at all either since the second half bleeds together with so much infernal blasting and guttural growling that it all starts to feel too samey-sounding to really get the full-impact of its’ intended mission, yet each of these effort only ends ups hindering this one slightly.

The first half is a solid representation of what to expect here. Instrumental intro ‘Prematuur’ features a crazed swirling guitar riff and distorted rhythms slowly leads into proper first track ‘Judaswieg’ features unrelenting pounding drumming, frantic rhythms and frenetic razor-wire riffing filled with tight patterns racing along the utterly chaotic tempos filled with plenty of ravenous change-overs and full-throttle blasting that carries into the final half that makes for a truly blistering and brutal opening shot. ‘Vernederd’ utilizes vicious razor-wire riff-work and tight rhythmic drumming to pound along at a savage mid-tempo charge as the tight guitar-work and blasting drumming continually bring the dynamic start/stop choppy patterns into the raging finale for another full-on blasting charge. ‘Lijdensweg’ opens with blasting drum-work and furious riff-work that work along through the twisting, technical patterns with the furious tempos taking the raging rhythms marching along with plenty of high-speed riff-work plowing alongside the maniacal drum-blasts howling along into the final half which makes for another strong highlight. ‘Vrouwenhaat’ utilizes utterly ferocious brutal blasting and dynamic rhythmic work with the furious guitars and twisting technical razor-wire riffing bringing along the choppy, chaotic rhythm blasting along in the finale for an enjoyable if not altogether essential track. The interlude ‘Kentering’ is a brief wall of distorted noise leading into the ferocious ‘Verbolgen’ which uses choppy rhythms, furious drumming and dexterous razor-wire patterns that continually plow through the utterly crazed blasting drumming with the swirling riff-work bringing along plenty of fiery rhythms as the dynamic patterns continually move through the crazed final half for one of the album’s overall highlights. ‘Gruweldaad’ slowly works up from the twisting technical patterns through the ravenous tempos with the tight, frantic blasting and swirling razor-wire riffing carrying the main rhythms along with plenty of savage patterns amid the choppy drumming with the savage patterns continuing on through the finale for another strong offering.

The second half is a little more of the same here but does contain some overly-familiar ideas. ‘Rubensvrouw’ utilizes choppy patterns alongside blasting drumming with the razor-wire riffs continuing through the frenetic, chaotic patterns alongside the utterly frantic drumming blasts and the furious, frantic riff-work dripping with blazing technically-precise rhythms into the charging final half for a strong overall effort. ‘Vulvanus’ offers bulging blistering riff-work and furious rhythms merging alongside the swirling patterns with the pounding drumming charging along with the up-tempo riff-work full of charging patterns and furious accents weaving throughout the chaotic patterns continually charging along into the finale for a dynamic if slightly overlong blast of feral material. The next instrumental breather ‘Achterdocht’ takes sampled cinematic howling winds and breathing before turning into a simple churning riff leading into ‘Geestesziek’ as the swirling riff-work and pounding drumming sound collide into a blast of swirling razor-wire patterns charging along at a furious mid-tempo pace with the furious drumming and intense riffing blistering through the charging and furious final half for another impressive effort. The title track features raging riff-work and tight drumming blasting through the furious, twisting rhythms pounding along as the fiery riffing continually blasts through the frenetic tempos with the extended mid-section breakdown leaving the dynamic bludgeoning rhythms blasting along into the finale for an overall enjoyable effort. ‘Synopsis’ features tight, utterly ferocious rhythms raging along through the choppy patterns with the plentiful drum-blasts blasting through with furious intensity charging along with bestial riffing churning along with the dynamic choppy rhythms continuing on through the final half in another overall strong track. ‘Teloorgang’ uses utterly raging razor-wire riffing and pounding drumming blasting along with furious intensity as the charging riffs weave through technically-complex razor-wire patterns alongside the furious drumming rhythms flowing alongside the rampaging guitar-work into the frenetic finale for a blistering and intense effort. Lastly, album closer ‘Ter ziele’ features sampled sounds and rather intense collages of distorted noise that works it’s way along quite nicely with the effect of leaving the madness behind that serves as the perfect ending note here.

Overall this is a certainly enjoyable enough release that does serve a more fitting epitaph for their fallen friend which is certainly respectable enough here though taken as a more traditional release it’s certainly lacking at times. It’s not enough to make this an all-over skip or a pass, especially for fans of maniacally-brutal and up-tempo death metal who are for sure the intended targets here, but the legacy does overshadow the music to a point.

Does it sound good? Order from here:
https://willowtip.bandcamp.com/album/murwgebeukt
Posted by slayrrr666 at 3:15 PM