Grave Forsaken - The Fight Goes On 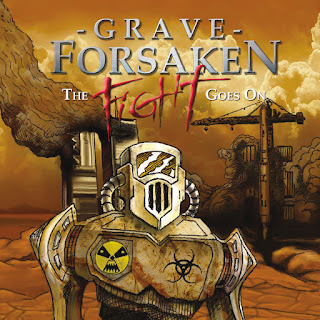 The sixth full-length from Australian thrashers Grave Forsaken features some rather enjoyable moments throughout here but is hampered somewhat by a few small flaws. For the most part the band is more firmly aligned in the thrash realm here with a series of tight, explosive riffing generating a series of up-tempo rhythms containing that crunchy riff-work that aligns itself quite easily with the old-school thrash movement, while the strong melodic vocals and tight crunchy riffing equally work as more thrash-based here than more normally influenced by death metal. Though the tight rhythm-work and crunchy chug-patterns do give the group a heavier style here that does approach more nominal death metal groups, it’s still not all the way there in terms of really needing that approach throughout here which does set-up the first of the album’s few problems. The heavier rhythm work on display does tend to come off much better when compared to the more prominent mid-tempo thrashing featured with a bit of a lackluster feel here dropping into those slower paces that don’t really offer this all that much of a truer thrash feel at times.With some plodding tempos and rather lackluster rhythms delivered as well at times, this one can struggle to remain interesting on the non full-on thrash tracks as there’s some pretty bland arrangements here that do occur. While it’s got enough thrashing moments here to make up for some of that, there’s still some weak moments holding this one down.

The first half here is a solid and serviceable showcase for their style. The title track features grooving bass-lines and raging drumming through tight, frantic patterns with steady up-tempo thrashing and utilizes scores of scalding thrash riffing with full-on melodic swarming solo-work as the extended melodic droning leads back into the raging thrashing of the final half for a solid opening effort. ‘There Is No Peace’ slowly works into a steady mid-tempo gallop with plenty of crunchy riffing and dynamic drumming that works through far more aggressive rhythms throughout the mid-section as the melodic thumping carries through the solo section with frantic riffing along the finale for a somewhat decent enough track. The bland ‘Politics of Popularity’ uses a slow-building intro with steady mid-tempo plodding with the sprawling ambient rhythms sprawling along at a lethargic pace with the tight, chugging rhythms holding along through the solo section and plodding along into the final half for an overall less-than-stellar effort. ‘Four Creatures’ features a steady mid-tempo stomp with plenty of groovy attitude with steady riffing keeping the steady rhythms throughout the simplified paces with a strong up-tempo blast throughout the marching stomp in the solo section into the finale for a rather enjoyable effort.

The second half here makes this one come off a little better with some enjoyable tracks here. ‘Duluth Airbase Intruder’ features a strong series of mid-tempo riffing with plenty of tight rhythms and stylish drumming as the steady riffing keeps the galloping mid-tempo pace along with the energetic solo section bringing along some up-tempo riffing with a far more steady series of riffing continues into the final half for an enjoyable effort overall. ‘Strike the Oppressor’ features a simple swirling mid-tempo riff with plenty stylish melodic beats carrying the thumping rhythms and tight riff-work along through the frantic riffing patterns leading into the scorching up-tempo rhythms and plentiful riff-work in the finale for another enjoyable thrasher. ‘God Is with Us’ features a steady, melodic mid-tempo dirge through a plodding series of swirling riffing with rather harmonies melodies alongside the steady, one-dimensional pace with the heavier rhythms carrying along through the solo section that brings the plodding rhythms along through the final half for a rather bland and ineffective track. Lastly, ‘Glimpse of Armageddon’ uses tight, raging riff-work with frantic rhythms and pounding drumming settling into a fine mid-tempo charge using the stellar patterns as the tighter rhythms carry the sprawling mid-tempo atmospheric break into the solo section full of frantic rhythms carrying on through the finale for an overall fine lasting impression here.

While there’s some slight flaws to be found here, this wasn’t all that bad when it mattered which makes this one quite enjoyable at times, though there’s some problems in here that will keep this from all but the bands’ most ardent followers and those that approve of this kind of Christian metal.

Does it sound good: Order it here:
https://www.soundmass.com/?product=the-fight-goes-on
Posted by slayrrr666 at 5:00 PM