Psychosomatic - Clicking Sound of a Hammer Pulled Back 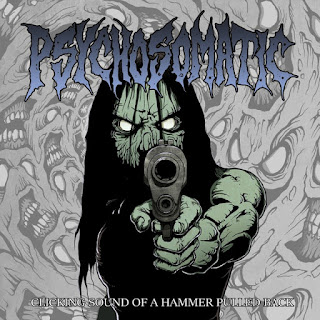 The fourth full-length from Sacramento thrashers Psychosomatic is a strong, steady series of crossover-inspired thrashing that comes off enjoyable if not exactly groundbreaking. There’s a simple, straightforward attack here based on prototypical crossover rhythms that takes on tight, frenzied thrash riffs mixed with simplistic hardcore rhythms that play pretty much throughout here without much deviation here which manages to give this a wholly intense series of riffs here that comes off with a sense of speed and intensity. This is straightforward and urgent, charging along at the blistering speeds or the most part here that contains all the more impressive work where it keeps the intensity blazing along for the most part, and with the tight, pounding drumming and occasional use of gang-shouting that all play off the typical crossover school here which gives this plenty of fun though there’s a distracting quality found here that crops up because of this style. The short, sharp attack featured here manages to make these tracks so uniform and similar that it kinda bleeds together into each other which manages to give the tracks a rather uniform appearance that wears out it’s welcome in the second half where it comes into a rather familiar series of tracks that don’t really pack the same punch as the top half. They’re still fun, but running through these kinds of rhythms does make for this feeling and it does manage to hold this one down somewhat.

The second half is a little weaker but still has some enjoyable elements. ‘Grand Mal Seizure’ takes on strong charging riff-work and intense rhythms pounding through hard-hitting riffing with charging thrash patterns taking the more hardcore arrangements through the explosive solo section and on through the swirling riff-work in the finale for a decent enough effort. ‘Conscripted’ features a steady series of tight, thumping rhythms with pounding drumming taking the rattling riff-work through the tight, technical patterns with plenty of pounding drumming alongside the tight, thumping rhythms of the solo section on through the final half for a solid-but-unspectacular offering. ‘Ritual Point’ uses blazing razor-wire riff-work with scorching leads thumping along in a frantic mid-tempo series of swirling riffing and pounding drumming with a strong series of thumping rhythms leading into the finale for another somewhat decent effort. ‘Hemmorage’ takes on intense razor-wire riffing with tight drum-work blasting through the intense rhythms and plenty of rather intense rhythms featured alongside the intense mid-tempo riffing charging through the solo section and continuing through the thumping final half for a much livelier offering. ‘Incite a Riot’ takes tight, razor-wire riffing with the intense gang-shouts carrying the utterly blistering and frenetic riff-work full of scorching, tight rhythms and thumping drum-work settling into a frantic mid-tempo charge through the intense finale for a strong effort overall. Album-closer ‘Downcast’ opens with a moody series of strumming acoustic guitars droning along through a melancholy, relaxed landscape with light, atmospheric rhythms carrying on through the relaxed tempos creating an effective-if-oddly-arranged closer here.

While it loses a little steam going into the final half there’s some utterly fun and raging tracks here that manage to incorporate enough blistering crossover thrash that it should wholly appeal to devout fans of the style or the band, or even those looking for something else beyond the typical thrash bands in the scene.


Does it sound good? Order from here:
http://buriedinhell.bandcamp.com/album/psychosomatic-clicking-sound-of-a-hammer-pulled-back-cd
Posted by slayrrr666 at 8:47 AM