Risen Prophecy - Into the Valley of Hinnom 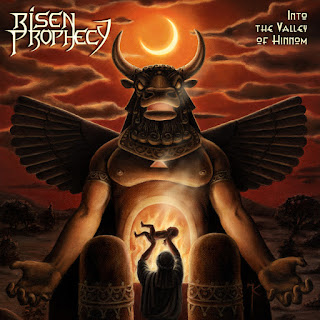 1. The Descension
2. Brood of Vipers
3. Knowing Nothing
4. To the Wolves
5. Into the Valley of Hinnom
6. The Ascension

The second full-length from UK power/thrashers Risen Prophecy offers up plenty of rather fun and enjoyable elements here that truly make this an enjoyable and wholly interesting piece of thrash. Taking a more speed-driven approach here, the music is by-and-large epic with wholly raging tempos throughout here that retain the technicality, bristling speed and infectious melodies running throughout the album here that when this one gets the intense thrashing driving along there’s plenty of enjoyable elements at play here. That’s even before it starts to take into account the epic-style arrangements at play here, opting for a grandiose sense of bombast that makes for quite an enjoyable addition to the rest of the melodies and rhythms by taking the blazing speed through a truly over-the-top series of patterns that contain the kind of explosive speed required here to really sell this one far more than the rest of the arrangements would’ve without employing that kind of bombast to the remaining elements here. though this does seem a little undone by the quick running time and overall short number of actual tracks on display with the opening and closing tracks being brief interludes against the remaining epic-length arrangements, these here are the only minor flaws on display here.

For the most part there’s no real surprises throughout here as this is exceptionally consistent. Opening instrumental ‘The Descension’ offers a light, romantic notes throughout that eventually work into proper first track ‘Brood of Vipers’ which whips through rolling drum-work and plenty of scorching technically-proficient riffs as the intense rhythms and pounding drumming brings the melodies alongside the pounding rhythms through choppy patterns and scorching intense rhythms along through the spindly riff-work into the final half for a stellar opening impression. ‘Knowing Nothing’ uses tight, raging riff-work and a stellar series of choppy rhythms throughout the first half with scores of melodic sprawling alongside the mid-tempo run with the tight crunchy riff-work with the technical patterns carrying the scorching speed-driven rhythms along into the epic arrangements throughout the extended finale for another overall strong and impressive effort.

By-and-large the second half doesn’t really do much differently from the first half. ‘To the Wolves’ takes a steady, melody-driven intro into a fine, stylish mid-tempo charge with frantic scorching riff-work and plenty of intense, driving riff-work and equally pounding drumming blasting through utterly raging up-tempo flurries bristling with epic, speed-driven rhythms into the melodic solo section and carrying the speed into the driving final half for one of the album’s overall highlight offerings. The utterly epic title track uses a steady mid-tempo plodding first half with tight rhythms slowly working into a thunderous full-throttle charging with the epic arrangements bringing forth even more speed and precision into the frantic series of high-energy thrashing while taking a brooding atmospheric mid-tempo break into a meandering psychedelic dreamspace that finally leads back into the frantic, charging up-tempo rhythms with the epic arrangements that carry through the solo sections into the finale for a truly engaging effort. Album-closing instrumental ‘The Ascension’ takes on a cinematic soundscape with a light guitar droning over howling winds and drawing the epic soundscape through the final half for an appropriate lasting note here.

Overall there’s a ton of absolutely stellar material here that comes off so well and dynamic that there’s so little to find fault with here that it tends to wind up appealing for so many different crowds here this one ends appealing to nearly all of them, from those that enjoy ripping speed-driven thrash, to the fans of epic metal or even fantasy-influenced melodic metal all quite easily.