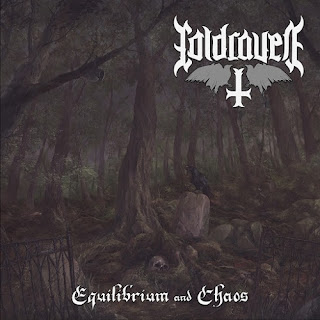 The debut release from Italian black metallers Cold Raven  offers a pretty intriguing and enjoyable take on traditional black metal that is an effective first offering here. Still based on quite dynamic tremolo riffing filled with the prototypical brimstone-sounding rhythms that are quite at home with the originators of the genre, these are effectively balanced in here with the more mid-tempo paces which brings along a far more melodic bent to the material than otherwise expected. Though the fiery sections here make this one contain a deep, heavy thumping rhythm section that propels the tracks forward, the fact that the slower tempo here ends up rendering these rhythms more melodic by default comes off rather nicely here by making the tracks much more restrained than just simply blasting along through the same repetitive rhythms that are usually featured throughout the genre which is a fine feat. That does tend to make this one seem a bit more lethargic and plodding at times when it goes for the lighter arrangements, and while that in itself does give the band a fine identity going forward there’s still a minor stumbling block here with that stylistic choice.

The first half here does manage to get this one going nicely. The opening instrumental ‘Intro’ features a quiet melancholy riff over sampled rainfall and bird calls leading into proper first track ‘No Mercy’ which features a slow-building series of tremolo riffs into a fine melodic mid-tempo turn with tremolo rhythms and a steady series of thumping drum-work taking the gradually-increasing amount of fire-packed riffing through the thumping up-tempo riffing in the final half for a solid opening effort here. ‘In Worship With My Inner Darkness’ features a simple droning series of tremolo riffing alongside the series of mid-tempo riff-work that takes a series of stylish rhythms and dynamic drumming through the melodic sections brimming with tremolo sections throughout the finale making for a solid overall effort. The fiery title track uses a simple, stylish mid-tempo pace with tight rhythms and thumping drumming as the rather charging mid-range tremolo riffing offers a heavy, simplified charge with blackened blasts and furious riff-work twisting along through the heavy, thumping rhythms of the final half for a rather enjoyable and impressive effort.

While packed with their epic-length tracks, there’s not a lot of difference between the sections here. ‘Trapped in a Cult’ takes a slow, extended droning intro with a series of stylish mid-tempo rhythms with pounding rhythms and the fine occasional blast of tremolo riff-work alongside the majority of the mid-tempo paces charging along through the series of twisting heavier rhythms and tight blasting that continually swirl through the mid-tempo paces throughout the finale for an enjoyable if somewhat overlong effort. ‘Eons of False Prophets’ brings heavy, thumping drumming and a strong series of swirling tremolo riff-work in strong spurts along through the briefer blasts placed alongside the more intense series of rhythms as the tight blasts and tremolo riffing carries on through the charging, thumping rhythms of the final half for an overall enjoyable track. Album-closer ‘The World is Doomed’ features a slow-building tremolo riff that leads into a steady mid-tempo series of blasts that feature more up-tempo rhythms and blasting drumming that manage far more intriguing arrangements with the simple charging rhythms carrying the blasting fury through the light droning of the finale for an enjoyable lasting impression here.

For the most part this one here wasn’t all too terrible but certainly does have some minor flaws for those who prefer their black metal far more of the fiery and explosive side here, though there’s still plenty to like here in this style which in the end makes this one a non-essential choice for those who prefer more relaxed and melodic forms of black metal.


Does it sound good? Order it here:
http://coldraven.bigcartel.com/
Posted by slayrrr666 at 4:20 PM