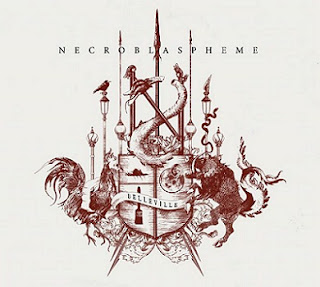 Album number three for French atmospheric deathsters Necroblaspheme, “Belleville”, manages to finally get the full use of their mixture of atmospheric chords and punishing death/black metal after toying with the sound in the previous EP release. Allowing for their past endeavors into pummeling old-school styled classic death metal, this new form isn’t as remarkable simply without the added punch that required here as instead this newfound form is lighter, more melodic and manages to come off quite a bit more relaxed in nature as the whole effort has more of a celestial-journey vibe as if the entire effort is traveling through the reaches of the cosmos. While there’s still more death metal elements abound here with the tight patterns and heavy riff-work at the forefront of many songs here before they descend into sprawling atmospheric jaunts, the lighter atmospheric work here is a little oddly placed alongside these tougher, more edgier samples makes for a disjointed work at times. It works far better here with the other addition of more black metal-influenced riff-work here as the tremolo-picked patterns are far more receptive to the sprawling celestial tone of these rhythms and manages to fit into the music on the whole much tighter and more coherently. Still, this can’t hide the fact that there’s three short instrumentals here where there really didn’t need so many, making this seem too sloppy and features too much of a start/stop feature in the middle of the album rather than the more cohesive builds at the front and back of the album and really should’ve been trimmed down or removed altogether.

On the whole, though, the songs are still rather good. Intro ‘Rempart’ uses a slow-building riff with an extended series of looping rhythms that finally turns into a sprawling series of riffs and double-bass blasts that urges forward in a rather long, monotonous repetition broken up by the dynamic drumming and swirling tremolo-picked rhythms for a fine opening blast that just takes too long to get going. ‘Le discours du bitume’ features one of the most groovy and consistently hard-hitting riffs swirling through rampant tremolo-picked series of riffs with a stylish series of choppy drumming, plodding rhythms and dynamic melodies that run throughout here for one of the most impressive efforts here. The first of the instrumentals, ‘How Did We Get There’ is easily the most skippable of them with nothing more than reverb-laden guitar squealing meant to suggest a mid-album breather but it’s too short to mean anything and the album’s only two songs in which means the need for a break is curious enough. ‘Two Trees (DeadWood)’ gets this back to normal with a tighter, sharper series of fiery riffs, blasting drumming and a more cohesive atmospheric section wandering through the middle of the track while the sprawling tempos are carried through the remainder here which makes it decent enough but still not entirely satisfying. The next instrumental, ‘Hyperspace’ shouldn’t even be here and would’ve been better served swapped with the previous instrumental and then left off altogether.

‘Waiting to Exhale’ offers forth a scalding series of tremolo-picked rhythms and blasting drumming whipping through some of the most extreme tempos on the album and mixing things up nicely with some sprawling atmospheric patterns and the occasional chug for an all-around more intensive effort. The last of the instrumentals, ‘Freed’ is the best with a haunting industrial tone and gradual build-up that makes for a fine impression overall here while segueing into ‘The Grande Boars Haunting’ with the same creepy atmospheric touch working alongside the gorgeously chilling riffs with plenty of sprawling atmospheric touches before blasting into devastating bursts of double-bass blasts and churning riff-work that makes this another fine highlight. ‘Gouffre’ is a little weird with its jangly intro, but turns into a worthwhile effort with some tight chugging, a fine series of atmospheric tremolo patterns flowing through a series of solid up-tempo melodies quite nicely that makes this a rather nice effort overall. Finale ‘Such a Lot’ offers more of the same here with a series of sprawling tremolo riff-work, blasting drumming and full-on churning rhythms here in the later half manages to pick up the intensity and urgency into the section as the pounding drumming and haunting chorus work into the finale bring this to a fine conclusion overall.

While there’s a few small pieces here and there that don’t quite hold up, there’s still some solid enough positives to really like here as they further refine and tinker with this newfound formula. It’s certainly worth a look for those into their past efforts or are completists of European extreme metal, though more ardent followers of their previous efforts should heed caution here.

Did I make it sound good? Order it here:
http://necroblaspheme.bigcartel.com/
Posted by slayrrr666 at 3:30 PM