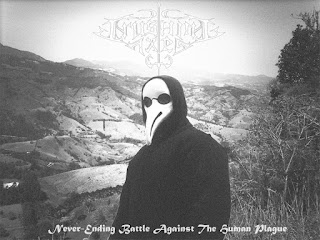 The tenth full-length album from Brazilian one-man death metal effort Crushing Axes tends to come across more the same as his past efforts but still retains a lot of enjoyable elements to keep this one rather nicely. As a whole, the album manages to feature a pretty consistent mid-tempo style groove loaded with heavy, chunky riff-work that seems to run through in one speed, the mid-tempo sprawl. This makes for a solid, meaty helping of simple riffing arrangements with a lack of variation in the tempos regardless of the fact that this one does go for a more aggressive series of arrangements. This does seem to make this decidedly more enjoyable than before as despite the one-note sprawling mid-tempo crunch throughout this, the faster tempos and riff variations is quite a bit more intense along with a deeper, rumbling production that makes this sound quite a bit deeper and more impressive. Still, the fact remains here with the album seeming to fall in love with the same types of rhythms and riff-work throughout this as the tracks are based on the similar-type paces have eerily familiar rhythms throughout and can make for a somewhat tedious exercise when it tends to run through familiar ground with each other, but by and large this one here is quite enjoyable since the much fiery style riff-work featured.

The first half here carries this one along quite nicely. Opening track ‘Raping the Earth’ features swirling riff-work and pounding drumming taking along at a steady up-tempo pace with surprisingly energetic and wholly engaging riffing along the simplistic patterns continuing along throughout the rather steady paces along into the final half for a rather fine opening here. ‘Stretching Guts’ uses a rather savage mid-tempo series of riff-work and rather charging mid-tempo paces here with the stuttering rhythms alongside the tight drumming working along into a rather tight, vicious mid-tempo series of blasting drumming keeping the charging rhythms along into the finale for an overall enjoyable effort. ‘Killing the Innocent’ brings frantic drumming and charging mid-tempo riffing full of steady, simplistic patterns with aggressive rhythms leading along into the soaring solo section rumbling along through the steady, simplistic drumming raging along with the stuttering riff-work into the final half for a fun track. ‘Death Sign’ rumbles along with steady drumming and plenty of aggressive, simplistic riffing offering some nice trinkling melodic sprawling rhythms alongside the thunderous drum-work leading along into the staggered riff-patterns carrying along throughout the rather charging rhythms of the finale for a fun if slightly unappealing track. ‘Christian Slaughter’ takes a sturdy, mid-tempo riff and fine drumming into a steady mid-tempo charge with plenty of ravenous drumming carrying along more intense riff-work along into the solo section full of sparkling rhythms and continuing along through the steady final half for an overall enjoyable offering. ‘Eppur si muove’ features a rumbling mid-tempo crawl with thumping drumming and steady riff-work that kicks into more ferocious and intense rhythms with some rather explosive blasting drumming carrying along into a fine melodic break in the finale for a stylish highlight effort.

Overall this here was quite the impressive if still somewhat flawed effort that makes for a much more impressive and enjoyable variation of his simplistic, energetic brand of death metal, making this one a rather solid effort that’s perfectly in line with fans of his previous work as well as those who prefer this kind of no-frills, to-the-point death metal.