McDeath - Lord of the Thrash 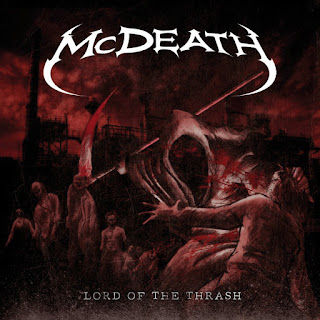 The second full-length from German thrashers McDeath shows that their near-decade gap between releases hasn’t slowed down their engaging energy or infectious attitude at all. Opting more in keeping with the Bay Area style than their traditional German brethren, that stylish crunch and explosive rhythms carry the majority of the work here culminating in pummeling rhythms, utterly frantic riff-work and pounding drumming that continues weaving in the odd technical pattern along the way which helps this out tremendously. It takes a strong sense of energy throughout here by adding in the kind of rather frantic rattling rhythms that feature alongside the kind of up-tempo patterns present here, and for the most part this is wholly addictive and energetic style thrash that doesn’t really generate any kind of truly obvious flaw present here. They misfire gigantically with their slow-paced ballad-like effort placed in the second half but this is still truly fun and enjoyable for the most part.

The first half here is a solid introduction to things here. First track ‘Baptized in Black’ uses a melancholy acoustic-driven intro that turns into a raging up-tempo series of driving drum-work and scalding riffing augmented by plenty of dynamic rhythms and pounding drumming with scattered melodic leads throughout the solo section into the charging final half for a stellar opening blast. ‘Reborn’ takes thumping rhythms and absolutely stellar riffing pounding along with the furious drumming into a frantic up-tempo pace full of dexterous drumming and tight, energetic riff-work keeping this one blazing along through the solo section and into the fine finale for another strong thrashing effort. The thrashing title track features blistering thrash rhythms and pounding drumming raging through utterly frantic paces littered with scorching riffs and plenty of rather energetic patterns keeping the thrashing up-tempo with dynamic riffing charging through the solo section and into the full-throttle final half for a truly blistering highlight. ‘Evil Lyn’ starts with a furious burst of up-tempo riffing and energetic drumming blasting through a scorching up-tempo series of rhythms full of pounding drumming and steady riff-work bringing along the rather fiery solo section and leading into the furious finale for a solid raging thrasher. ‘Metal Diplomacy’ uses a sampled intro that turns into a steady mid-tempo groove with the fine thrashing rhythms alongside with the energetic riffing and pounding drumming keeping this moving along firmly in the mid-tempo range with plenty of charging grooves through the solo section and into the final half for a fine if somewhat lackluster effort.

The second half here is much like the first half. ‘The Wytchhunter’ takes rattling riff-work and dynamic drumming through the stuttering, mid-tempo rhythms with dynamic, charging riffing throughout the more up-tempo paces featured throughout with the pounding drumming leading into the solo section and through the surging finale for a slightly more enjoyable offering. ‘Stronger Than All’ features blistering drumming and raging technical thrashing riff-work surging through the blistering tempos with the rhythms keeping the energy up before dropping off slightly into plodding mid-section solo leading back into the raging final half for another strong, enjoyable effort. ‘Through Hell’ blazes through raging tempos with pounding drumming, intense riff-work and plenty of dynamic rhythms with the stellar up-tempo rhythms carrying the twisting riffing alongside the dynamic rattling patterns chugging along into the solo section and into the charging finale for a blistering thrasher. Their epic ‘Pale Grey Sky’ features a melancholic intro that slowly grows into a steady mid-tempo feel with laid-back rhythms and steady drumming slowly growing into a mid-paced charger with a melodic charge through the solo section leaving the melodies at the fore-front through the final half for a decidedly disappointing effort. Finally, ‘Kingdom of the Dead’ opens with a blistering serie of twisting mid-tempo rhythms with rattling drum-work alongside charging riff-work taking the intense rhythms along into the heavy, thumping grooves leading into the mid-tempo charging of the solo section leading along into the frantic finale to end this one on a truly high note.

This here proved to be quite the engaging and truly enjoyably thrash efforts here with plenty to like here that makes for an enjoyable effort in the genre in the first place, making this quite effective at delivering the goods for old-school thrash fans or devout revival aficionados alike who should eat this up immediately.

Does it sound good? Order from here:
http://mcdeath-band.bandcamp.com/
Posted by slayrrr666 at 3:54 PM