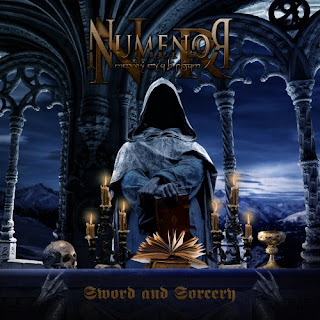 The second full-length from Serbian black/power metal mash-ups Númenor is pretty much on-point with how the band operates this dark-fantasy styled showcase they’ve been utilizing for awhile now. At the core of the band is the facet of using bombastic, majestic compositions that retain a cinematic style quality to the fast, furious music here that allows the keyboards full range of motion from their symphonic background here that serves the band very nicely throughout here. Featuring the type of epic bombast more normally associated with charging into a battlefield than any kind of symphonic overload, this ends up full of blasting drum-work and stylized if underutilized riffing to create a flurry of speed-driven barnburners that more-often-than-not enjoy a typically up-tempo feel aided along by these majestic melodies that’s entirely enjoyable. Still, the fact that the band tends to employ a dual-vocal approach that’s highly original and enjoyable is the biggest selling point, utilizing black metal shrieks and growls over this type of bombastic music alongside truly soaring clean singing is a fine step here. With the occasional rabid snarl turning into a clean croon used on multiple occasions, this makes for a really enjoyable time and gives this a somewhat different feel than most symphonic power metal albums. Undoubtedly the guitars should be more utilized throughout here for when they appear there’s a lot to like about them ripping away with some fantastic melodies and surging rhythms, and the album does tend to feel quite short with the several interludes that keep the running time down from what could’ve been, but for the most part there’s not too much to dislike here.

The first half here has plenty of enjoyable efforts to it. Opening instrumental ‘Prelude’ offers a grand majestic intro with a marching battle theme that leads directly into proper first track as ‘Dragonheart’ blasts away with a grand chorus of swirling keyboards, blasting double-barred drumming and soaring guitar-work that works along a series of melodic vocals and ferocious snarls that weave the enthusiastic energy into a grand chugging solo section full of fiery leads that continues into the finale for a strong opening salvo. ‘The Arcanist’ utilizes a more mid-tempo march with the same pounding drum-work and majestic keyboard work that works through more of a plodding pace with a few varying tremolo-picked rhythms that pick the energy up significantly as a fine mixture of pounding drumming with swirling keyboards continue swirling together into the final half for a fine if somewhat unimpressive effort. The first instrumental ‘Interlude’ features a simple classical piano melody trinkling along to a majestic choir arrangement that blasts into ‘The Prince in the Scarlet Robe,’ which uses a more up-tempo and marching keyboard tempo with swirling keyboard rhythms alongside the dexterous drumming that continues swirling throughout the changing vocals as the soaring melodic solo section brings the thumping energy along into a relaxed finale outro that leaves this one quite an enjoyable blast.

The second half here is a slight notch below but still contains enough to make it listenable as well. ‘The Oath of Fëanor’ takes a more somber approach with the orchestral choirs and more subdued drumming alongside some chugging riff-work alongside the rather bombastic keyboard work with a simple chugging pattern continuing on throughout the mid-tempo solo section and carrying on through the final half for a decent if unspectacular effort. The utterly frantic ‘Dragon of Erebor’ features a grand majestic keyboard intro which blazes into a sterling rampaging riff with plenty of melodies touches firing through a series of strong symphonic rhythms blazing through with plenty of bombastic drumming and scorching leads bristling with melodies and charging tempos that continues on into the grand finale for unquestionably the band’s highlight effort in their career. The last instrumental ‘Prelude II’ is mostly baroque chamber music blaring away with a light keyboard melody that leads nicely into ‘Bane of Durin’ as it takes the bleed-through keyboard melodies into a nice mid-tempo march that utilizes a tight chugging rhythm with swirling tremolo-picked riffing that gets buoyed by the light keyboard melodies and symphonic overtures carrying along into the solo section as the thumping rhythms pick up nicely into the final half for a highly enjoyable and impressive outing. ‘Sleeping Sorceress’ works through an extended sampled intro of keyboard sounds before turning into a mid-tempo blast of chugging riff-work, blasting drumming and swirling keyboard accents that takes a blazing mid-tempo pace throughout with the tight rhythms working in a series of melodic flurries into the solo section and continuing through the finale ends this on a positive note with a great lasting impression.

With a lot of enjoyable elements at play here, including a rather novel approach to symphonic power metal that’s not really tried all too often despite the impressive results it yields here, this ends up being a far better effort than expected which is really recommended for those looking for something different with their fantasy-driven power metal even with enough similarities that it won’t deter the traditionalists from liking it either.