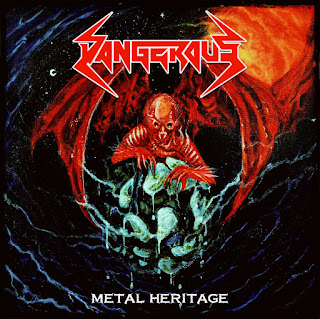 The debut full-length from Chilean thrashers Dangerous effectively places them right at the forefront of the retro-thrash revival scene here with this blistering assault of old-school thrash. There’s no real surprises here as this here is essentially Bay-Area thrash circa 1989, meaning this one plays with all the usual toys in that playbook but manages to execute them so effectively and enjoyably that there’s hardly anything at all wrong here beyond that straight-up rip from that style. Taking tight, crunchy riff-work and thunderous drumming along with frantic, intense arrangements offering forth plenty of speed and driving energy that allows for plenty of stellar rhythms and full-on thrashing straight from that school of metal. The hard-hitting drumming keeps things running along the intense paces driven by these strong rhythms, and the whole affair is made all the more engaging here with that type of infectious old-school attitude running throughout the tracks here. Even the strong production style here makes this quite a fine retro-sounding affair with the up-front guitars and noodling bass-lines while the pounding drums batter away in the background. It’s just the fact that this one is so overly familiar and takes straight from the past without changing it that holds it back.

There’s a great sense of what’s on display here through the first half. The opening instrumental ‘Intro’ uses howling winds and a light, trinkling guitar riff offering melancholy atmospheres that slowly work their way into proper first track as the title track features explosive riff-work, raging rhythms and pounding drumming that utterly blasts through tight, frantic tempos carrying schizophrenic and intense patterns along through the solo section as the urgent, intense paces continue through the finale to make an explosive first impression. ‘Victims of Hate’ features tight, raging rhythms scorching alongside the thumping lead-work thumping along to the charging, energetic mid-section work with plenty of pounding drum-work bringing the tight riffing and up-tempo paces racing through the frantic solo section in the final half for another overall enjoyable highlight. ‘Thrash on the Streets’ uses a strong retro-style intro with utterly explosive frantic riff-work and thunderous, pounding drumming complete with intense riff-work and rather frantic drumming with scorching melodic work through the dynamic solo section into the crunchy charge of the finale for a truly frantic highlight offering here. ‘Murderous Tradition’ features a steady build-up intro into a plodding mid-tempo pace with the explosive, tight riffing and thunderous drumming carrying along nicely through the frantic rhythms and driving intense riff-work featured throughout the charging and intense rhythms in the solo section bristling through the final half for a nice energetic thrasher.

The final half here makes for a solid, cohesive whole here. ‘Sacrifice’ brings a tight, charging series of thumping riffing and steady drum-work along a fine mid-tempo gallop that continually brings the stylish rhythms along through the steady thrashing rhythms with the fine thumping energy throughout the stylish thumping in the solo section and on through the charging finale which makes this a slightly lower but still enjoyable effort. ‘Danger's Return’ features a blaring air-raid siren leading into tight, frantic riffing through blazing up-tempo rhythms featuring frantic drum-blasts and surging riffs thrashing along the steady mid-tempo pace full of buzzing rhythm patterns with plenty of crunchy patterns pounding into the solo section final half for another truly enjoyable offering. ‘Batalla Final’ takes thrashing up-tempo riffing and pounding drumming along through a frantic mid-tempo gallop full of tight buzzing rhythms and simple patterns that race along through the enjoyable up-tempo pace through the solo section and though the charging finale for an overall enjoyable effort. ‘Executioners of Mankind’ uses a stylish mid-tempo gallop through a series of charging riff-work and pounding drumming thumping along to the up-tempo pace throughout here with technically proficient rhythms thrashing along throughout the steady up-tempo paces leading into the solo section and carrying through the strong, thumping final half for another strong track. Album-closer ‘Running Amok’ features a simple mid-tempo thrashing riff with plenty of pounding drumming ripping through a frantic up-tempo pace with scores of melodic rhythms running alongside the rampaging riff-work and taking the frantic riff-work through the tight solo section finale for a great ending impression here.

This was quite the fun and overall impressive effort that really only falls down slightly to the fact that it doesn’t really offer much new material here in terms of old-school thrash, but the energy and enthusiasm that they display in that style make up for quite a lot of those flaws and makes this a stellar choice for old-school thrash revival fans or even thrash in general.

Does it sound good: Order it here:
https://dangerouschile.bandcamp.com/
Posted by slayrrr666 at 5:03 PM