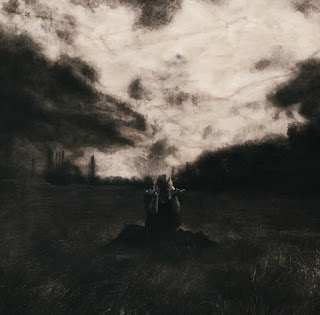 This split release from these two black metal acts, the Finnish Ancestors Blood and Dutch Heervader, comes off rather well here with two pagan-inspired acts coming together for a truly enjoyable release.

On the Heervader side, this is mostly a nice mid-tempo affair that runs through mostly swirling tremolo rhythms and a raw, simplistic style that makes for bouncy, light pagan tunes. There’s another strong pagan influence here with the strong use of keyboards and acoustic guitars with the lyrics in their native tongue that furthers this all rather nicely alongside the tight use of traditional galloping rhythms and paces that makes the group rather engaging with their melodic tendencies helping to lend a fair bit of easy-going sensibilities to their section by making for pleasingly enjoyable tracks without really wading in the extremes of the genre. ‘Berserkgangr’ begins with spritely acoustic guitar runs before going through a lively mid-tempo series of tremolo-picked runs keeping to bouncy pagan rhythms as the occasional blastbeat works alongside the raw riff-work as interludes of folk instrumentals run alongside the warm tremolo melodies through the final half works for a strong opening. ‘Bloedbroeder van de Aarde’ features simple, thunderous drumming with an extended speech that turns into a bouncy mid-tempo gallop with swirling tremolo patterns and raw riffing through the series of tight rhythms with the light riff-work against the thunderous drumming along through the grand finale makes for another strong effort. ‘Voorwaarts!’ uses a fine acoustic intro with a nice burst into a fiery mid-tempo burst with swirling tremolo patterns and light acoustics mixed together for a fine series of patterns running throughout the sprawling, mid-tempo pace with the riffing continuing alongside the steady drumming with the light pagan patterns throughout the final half for a rather enjoyable conclusion to their side.

On the Ancestors Blood side,this ends up being quite similar overall with a few small added touches here and there. Again, the framework is based on swirling tremolo riffing and pounding, simplified drumming along steady, mid-tempo paces throughout that add a distinguished melodic flair and ambiance to their tracks as the strong framework keeps the tracks running along quite smoothly as should be beneficial from their longer career that yields a more cohesive, competent approach. The one big factor here that differentiates them from the others is a kind of grandiose, majestic keyboard bombast throughout the tracks that adds a grand style along with the raging tremolo riff-work that effectively portays the raw, repetitive arrangements associated with the genre for the big winners of the split. ‘Deceiver for Power and Glory’ features strong swirling tremolo patterns and charging drumming wrapping into a steady buzzing series of riffs with strong ethereal keyboards creating a fine epic soundscape with the extended patterns alongside the thumping drumming with the ethereal patterns coming through the finale for a rather enjoyable offering. The epic ‘Ritual of the Sacred Dance’ features a steady buzzing tremolo pattern steadily running through a fine mid-tempo series of patterns with the ethereal keyboards holding the melodic rhythms through glowing patterns of haunting keyboards washing through the simple rhythms with the fine drumming keeping the atmospherics in check throughout the final half for a strong if overlong effort. Finishing off with live versions of ‘Revelation (Beyond Death)’ and ‘Rise of the Spirit of Ancient Heroes’ where both take an endless droning series of riff-work through the fine mid-tempo riffing that holds the fine melodic rhythms and epic keyboards haunting throughout the originals only drenched in the low-fi reverb to effectively drown-out the actual riffing beyond the singular arrangements here for a fine if entirely unneeded conclusion to their side.

Overall, with the two bands here coming pretty much from the same style and making for a pretty cohesive style, this one gets quite enjoyable here at showcasing these two promising pagan black metal acts. Definitely worthwhile for those who are fans of either act on the release or the generally curious fan of this style looking to try something else out in the style.


Does it sound good? Order from here:
https://heidenshart.bandcamp.com/album/split
Posted by slayrrr666 at 12:31 PM