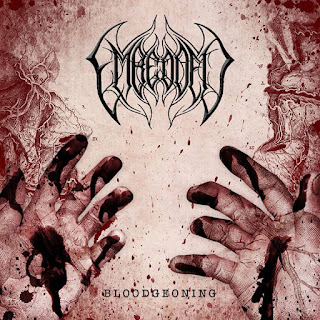 The fourth full-length from German brutal death metallers Embedded showcases this institution is still going strong offering this dynamic, beefy slab of brutal death. Offering the kind of tight, blazing riff-work full of frenetic, intense rhythms and scorching patterns, there’s a wickedly brutal air throughout the tracks here that offers up far more brutality with the use of the full-throttle tempo they’re played at. Running razor-wire style riffing and tight, blasting drumming at these speeds makes for quite an overall enjoyable time here getting the music to this kind of dexterous, twisting riffing done at this kind of full-throttle style that gives way to plenty of truly frantically-placed brutal death metal rhythms that contain plenty of howling patterns and rhythms that makes this far more old-school sounding than would be expected. This creates such a fine overall sense of fun here in the mixing of utterly brutal, pummeling rhythms alongside the more enjoyable old-school production style. Overall the album isn’t really all about the kind of experimentation or diversity that usually finds itself in the genre, as the band does tend to whip through basically one mind-set from start to finish here. The pummeling attacks and furious riffing that continually goes through each of the tracks here doesn’t really offer a whole lot of differences here between each of the songs as there’s an alarming singular-style arrangement. This one just plows ahead here without really varying up the arrangements or paces throughout this one, as while it does offer forth a strong volley of riffs there’s not a strong sense of variety that comes along, The straight-forward blasting doesn’t really offer up the room to do this anyway and that keeps the album feeling redundant at times with the deeper this goes, but it’s still only a minor fault to be found here.

The first half here makes for a strong impression overall. Opener ‘Quadruple Corpse Horror’ features utterly blistering drumming and twisting technical rhythms through the bouncy riff-work blasting along with plenty of savage drumming patterns carrying the dynamic paces with blistering riff-work and thumping patterns full of heavy, dynamic swirling riffs into the final half for an impressive opening blast. ‘Murder-Suicide’ uses a blistering series of rumbling riff-work and frantic drumming to carry through the tight series of razor-wire rhythms keeping a tight, steady mid-tempo pace featuring the frantic drumming blasts alongside the steady rumbling thump from the buzzing riff-work into the finale for another dynamic offering. ‘Cleansed by Fire’ features a slow-burning intro with dynamic riff-work and steady drumming slowly firing through tight, furious rhythms and dynamic blasting drumming thumping along at frantic tempos with the steady intense riffing holding the brutal patterns on throughout the final half for an immaculate highlight. ‘Dawn of My Being’ features tight, furious rhythms blazing along at a high series of intense patterns carrying the steady up-tempo riffing along with the frantic blasting drumming and thumping rhythms carrying the full-on intensity from the rumbling rhythms carrying along through the blasting finale for another utterly strong effort.

The second half here does have a lot of enjoyable parts to it as well. ‘Edenblaze’ rumbles along with steady mid-tempo rhythms on through the steady mid-tempo riffing before exploding with the frantic drumming into the furious razor-wire patterns blistering along with the tight, furious blasting coming along through the up-tempo rumbling full of punishing riff-work alongside the dynamic drumming through the final half for another strong highlight. ‘Grinding the Bones’ starts with ravenous razor-wire riffing rumbling along with plenty of tight, frantic blasting with a steady series of intense mid-tempo riff-work twisting along with the dynamic drumming that picks up strongly with utterly furious and frantic pounding rhythms along through the finale for a tight, explosive effort. ‘Time Has Come’ opens with furious blasts and tight, frantic riffing with furious drumming blasting along with the dynamic riff-work blazing through technical patterns flowing with ravenous, twisting patterns alongside the thunderous drumming carrying along the mid-tempo patterns in the final half fora furious overall effort. Lastly, album-closer ‘Bowed’ uses an extended buzzing intro that propels into a series of tight, frantic riffing through blazing razor-wire patterns alongside the pounding drumming full of choppy technical patterns blasting away with the ravenous flowing riff-work through dizzying complex runs with the blazing drumming carrying the intense patterns through the fade-out finale for a grand lasting impression.

This here is such a furious and enjoyable piece of brutal death metal that it scores so well with a lot of it’s full-throttle fury on display here, and while it does come off rather one-dimensional there’s far worse examples of this style out there which makes this a choice pick for brutal death metal aficionados as well as those that enjoy the more old-school style at work.

Does it sound good? Order from here:
http://www.embedded-deathmetal.de/
Posted by slayrrr666 at 3:17 PM