Agony Divine - March of the Divine 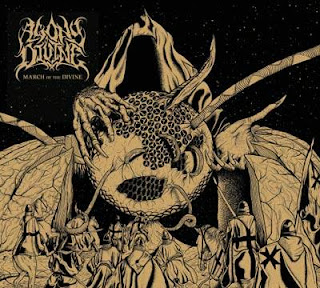 The debut full-length from these North Carolina death metallers may not be the most enjoyable variation on the style but is a decent enough mixture of Death Metal and rocking, punk-ish Thrash that is enough to make for an entertaining diversion if necessary. The simplistic tone of the material here is quite apparent, usually relying on two or three rousing mid-tempo riffs with a lot of sprawling Grunge-sounding sections that just sound like directionless masses of chords and rhythms without really doing a whole lot to really align itself one way or another into either genre with plenty of consistent marks here as there’s a lot more alternative work throughout here with these sprawling, noisy sections and far more insistent use of clean vocals than either genre readily accompanies. The riffing is simple Death Metal-styled rhythms and patterns played at mid-tempo Thrash-like force while offering up sprawling sections that don’t really seem connected either way around which makes for a disjointed work here with these thrashy rhythms and hard-charging riffs being quite enjoyable only for the slower, plodding efforts to really make no sense and seem somewhat out-of-place here. Though nothing is really a detriment in itself, it’s really more the jarring way they come in that makes this somewhat stand-out, and against the simplistic nature of the rest of the material is really what makes it stick. Otherwise there’s a somewhat decent effort here.

The first half here does make for a rather straightfoward take of the album. Intro ‘Heaven's Hive’ is a nice little bit of cheerful singing and apocalyptic war-noises coming together to lead into ‘False Hope’ taking a raging riff with plenty of intense tremolo rhythms thrashing into the rather charging mid-tempo section which offers plenty of furious leads and dynamic rhythms that carries on throughout here for an impressive opener. The title track gets a droning intro with a stuttering start/stop rhythm that carries a rocking punkish feel to the loose rhythms and near spoken vocals that follow along a series of bland riff-work before kicking back into full throttle rhythms into the later half which is much more enjoyable than what came before. ‘Streets of Terror’ goes charging through a much more energetic pace with some punk-ish thrashing rhythms and a dynamic bit of drum-blasts that are fine enough for the diversionary riffing to again crop up that sounds quite out-of-place on the more thrashing material elsewhere here.

The second half here doesn't really change this up much. The blaring blasts of ‘No Forgiveness’ turn into a raucous thrashy mixture which is quite adept at holding the other elements at bay with the rather furious tempo kept up throughout here as the tempo shifts are off-set with the hard-charging riffs and pounding drumming that makes this one of the most consistent and enjoyable efforts. ‘Denial’ brings some intensity as well with a wieldy intro that delves into a solid mid-tempo crunch that manages to stay within the same pretty consistent approach elsewhere and doesn’t really stand out all that much from the others here. ‘Manipulation’ offers some impressive tremolo rhythms and rocking tempos bringing along some thoroughly rousing energy along the way with the most explosive riff and plenty of pounding drumming that makes for another fine highlight here. ‘Stained With Grief’ brings a rather mid-tempo choppy rhythms that settles out into another raucous series of rhythms that’s continued throughout here quite nicely with the additional running time here allowing this one to get more enjoyable as it carries on. ‘Wither’ offers a rather tired mid-tempo chug throughout the simplistic series of mid-range sprawling riffs that keep the charging riff-work confined to the second half with a sense of blandness that doesn’t overcome the first half which keeps this one down significantly. The ‘Bonus’ song here is a thoroughly confusing sing-a-long chant that doesn’t seem the slightest bit interesting on a Death Metal record and there’s little about it that’s appealing, leaving for a bad taste overall.

While this isn’t the greatest first impression made as this is just too flawed to be much better than this decent-enough tag it has, there’s certainly room for improvement here.

Does it sound good: Order it here:
http://www.facebook.com/agonydivine
Posted by slayrrr666 at 3:53 PM