Dauden (Nor) - My Soul Will Be Damned Forever 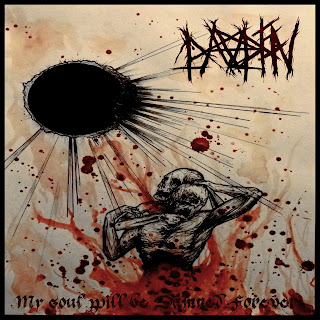 The debut full-length from the Norwegian black metal group Dauden is a strong and enjoyable if not very original take on classic second-wave Norwegian black metal. It’s pretty much paint-by-numbers style work throughout here, with the brimstone-soaked tremolo pattern riff-work giving this a decidedly strong touch of atmospheric flavor that comes from the old-school style of black metal played in that original grouping, blastbeat-driven drumming that allows for the utterly dexterous and smooth tempo changes from utterly frantic and chaotic driving rhythms to the more prominent mid-tempo gallops that are featured here which allows the riffing to vary according to those rhythms, it’s all quite expected to be featured here in these kinds of acts and really isn’t all that innovative. That, though, tends to be quite easily overlooked here with the simple fact that the band's history has allowed them to pull off this kind of material with a conviction and energy that’s quite lacking in many similar acts who run through the motions. The songwriting dynamics on display of allowing these pretty lengthy and absorbed tracks to remain consistently enjoyable and engaging with the kind of varied tempo shifts and variations to be found here that makes for a much more enjoyable listen. It’s still pretty cliche, but there’s a lot more to like here which does raise this somewhat.

The first half here is a very strong indicator of what’s to be expected here. Opening with the title track that takes a straightforward intense series of buzzing tremolo-picked patterns and plenty of blasting drumming with dexterous strikes running along at a steady frantic pace with plenty of furious up-tempo tremolo-picked patterns carrying the steady rhythms along into the final half for a stellar opening track. ‘Akem Manah’ uses clattering drumming and buzzing tremolo patterns with plenty of frenetic drumming with the tight swirling tremolo rhythms carrying the blasting up-tempo paces along with a few minor melodic flurries from the riff-work that drops off for the charging finale for another strong, enjoyable offering. ‘With No Presence of God’ features a steady, plodding mid-tempo intro with sprawling tremolo patterns that turns into a steady series of thumping patterns with the furious charge through the mid-section featuring plenty of frantic blasting alongside intense buzzing tremolo riff-work leading through the sprawling final half to make this a stylish and enjoyable epic. ‘God Did Not Create Us’ takes a steady mid-tempo gallop with the frantic tremolo riffing and plenty of tight, blasting drumming taking the far more chaotic rhythms and stellar riffing through the sprawling mid-tempo sections as the blazing tremolo-picked rhythms continue on through the thumping finale to give this a strong highlight offering.

The second half here is another strong set of songs that does feel a little short being that they’re all epics. ‘Suicidal Seduction’ blasts through intense drumming and frantic swirling rhythms continually blaring throughout the thumping, driving rhythms led by the frantic swirling riff-work alongside the full-on blasting drumming taking the sprawling melodies into the charging tremolo riffing in the final half for another strong track if it comes off just a bit too long with the extended.finale. ‘Where Light Touches None’ takes an immediate series of swirling tremolo patterns amidst blasting drum-work and a sharp series of rhythm changes that blasts out into frantic up-tempo gallops and charging mid-tempo driving rhythms with plenty of sprawling riff-work and melodic, celestial keyboards providing ambience leading back through the sprawling tremolo patterns in the finale for a much more enjoyable epic. Finally, ‘The Sign of the Goat’ features a strong, plodding series of riffing and steady drumming as the mid-tempo rhythms and sluggish paces give way to more frantic patterns with the choppy drumming and swirling tremolo patterns still keeping the droning patterns on throughout the final half for the album’s lone dud and a pretty underwhelming final impression.

Though this one does tend to play by the rules way too often and doesn’t really bring anything new to the table that dozens of other old-school-worshipping bands are providing, they’re still one of the more fun acts here with the conviction and fun they generate which tends to make this an easy recommend to those looking for another enjoyable effort from that whole scene.

Does it sound good? Order from here:
https://www.facebook.com/Dauden.norway
Posted by slayrrr666 at 8:48 AM