Hi-GH - Till Death and After 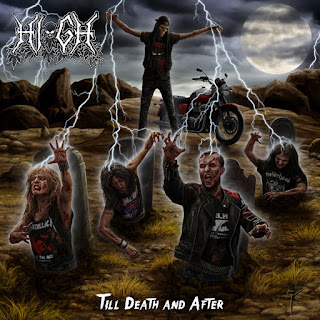 The second full-length from Italian heavy metallers Hi-GH is a certainly strong and rocking effort that really gives their speed-driven anthems quite a bit of flair. In contrast to a lot of the written material for the band, the general air here is decidedly classic heavy metal with an admittedly prevalent punk-rock leaning in the simplistic, energetic manner of their rhythm work throughout this, making for a toughened, airy atmosphere throughout here being fueled by simple, repetitive riffing that generates a strong sense of speed for the tracks as a whole. This does drift slightly towards a melodic power metal scenario with the classic rhythms melded onto a speed-metal framework, but the general influx of truer heavy metal patterns does manage to keep this aimed more along that pathway. The biggest issue here is the fact that the strong punk influence here does manage to keep the tracks here pretty solidly and firmly one-dimensional without too many variations or stand-out moments of deviation within their arrangements here, only offered in a few small sections of the tracks which comes more from their traditional metal baseline anyway and really dropping the punk elements out of focus for the most part.

The first half here is a solid-enough start to this one. Opening storytelling intro ‘We Are the End of All’ features a sampled droning effect and a distorted speech that all sets the stage for proper first track as the title track fires off tight, raging speed metal riffing and pounding drumming augmented with the constant volley of galloping up-tempo riffing taking the rumbling rhythms and tight drumming through the solo section and on through the charging finale for an overall impressive offering. ‘The Russian Border’ uses a warfare-themed sample before firing into a steady, thumping series of tight riffing buzzing along to the rumbling bass-lines and pounding drumming charging throughout the solo section with the tight speed metal riffing carrying into the final half for another enjoyable track. ‘Sex Machine’ features an extended droning intro with rumbling riffing, frantic speeds and pounding drumming through the raging up-tempo paces through the rumbling, extended solo section filled with tight raging rhythms that carry on through the blazing finale for a less-enjoyable-if-still-entertaining effort. ‘Drug Your Destiny’ uses a steady swirling mid-tempo plodding rhythm with tight drumming that turns into a steady, rocking up-tempo gallop full of rocking rhythms and speed metal rhythms leading into the explosive solo section with plenty of driving riffing into the final half for another strong and enjoyable offering. The short rocker ‘Devil's Fire’ uses blaring punk-ish bass-lines and rolling drumming kicking into a stellar up-tempo pace with simplistic rocking punk rhythms raging along to the simple riffs thumping along with the rattling rhythms coming along with the strong finale for an enjoyable offering.

The second half here is certainly enjoyable enough with a few minor missteps. ‘Born Under Evil Defence’ brings a moody, atmospheric intro into a strong mid-tempo gallop with swirling riffing and charging energetic drumming racing through the blistering tempos with the stylish mid-tempo patterns continuing through the final half for another solid overall effort. ‘Your Bloody Face’ features a blaring bass-line rhythm and tight, frantic punk riff-work through the blazing up-tempo rhythms continuing throughout the finale for an even more impressive shorter thrasher. ‘White Car Fever’ slowly fades in from a steady speed-metal riffing pattern into a steady speed-driven series of rhythms as the thrashing punk energies are focused into the barreling tempos leading into the first solo section and sprawling through the second section as it leads to the pummeling final half for a highly enjoyable highlight. ‘Deal of Death’ takes thumping up-tempo rhythms and pounding drumming along the steady riff-work with plenty of tight patterns keeping this blazing along with a drop into fiery-but-more melodic rhythms leading into the solo section with the furious, charging rhythms continuing through the finale for strong back-to-back highlights. ‘Forged in Hell’ features a simple, charging riff firing through a blazing up-tempo pace with rocking energetic drumming carrying the frantic, off-the-rails intensity along through the simplistic rhythms with the blazing solo section and keeping the rattling tempos throughout the final half for a rocking, enjoyable track. Lastly, ending with their cover of Hastighed’s ‘German Metal Attack’ keeps the simplistic, driving intent of the original with a thumping, driving attitude from the pounding drum-work that continues on throughout the track here for a fine if non-essential listen to close this out.

This here is a highly enjoyable blast of speed-influenced traditional metal that contains enough dynamics and enjoyable moments to really work a lot of different facets into this one that gives it a lot of overall appeal to those firmly entrenched in the classic old-school metal style or fans of more energetic offerings overall.

Does it sound good? Order from here:
https://hi-ghspeedmetalofficial.bandcamp.com/
Posted by slayrrr666 at 3:57 PM