Maze of Terror - Ready to Kill 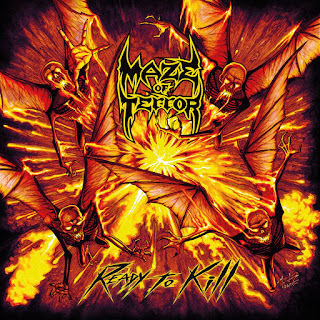 The debut album from Peruvian thrashers Maze of Terror features quite a wide amount of work here to give this one of the most impressive and engaging debuts in the genre in a long time. From the start this one manages to feature the kind of ravenous, swarming thrash that’s built on the revivalist trends of aping the bay-area attacks from the past, leading to utterly stellar riffing dripping with speed, taking the sort of frantic rhythms and pounding drum-work carrying the kind of arrangements expected to be found in that style. There’s a savage serie sof riffing on display that comes from the swirling, up-tempo patterns here where this one really brings up some imaginative and varied attacks to the table that enables this speed-driven style to stick out even better by being surrounded by the dynamic change-ups offered. It enables a far more intensive effort here with this one creating such an infectious and ultimately appealing when it thrashes away with reckless abandon while still offering the kind of dynamic and varied approaches to the craft that it manages to keep from being a one-trick affair. Though it still manages to keep the same rhythms running throughout here when it is thrashing along lending to some tracks bleeding together it’s such a minor detriment as to be almost completely useless and overdrawn here.

The first half here provides an engaging and enjoyable start to this one. Intro ‘Rotting Force’ uses howling winds and a sampled countdown to turn into an utterly frantic and raging series of swirling rhythm alongside pounding drumming keeping the utterly dynamic patterns racing at full-throttle speeds into the chaotic solo section and carries through the final half for an explosive and enjoyable opener. The utterly frantic ‘Lycanthropes’ features swirling riff-work and fiery rhythms charging along through a frantic mid-tempo series of rhythms with steady riff-work bringing the charging intense paces along through the intense paces charging along with plenty of blistering drumming in the fiery solo section into the charging final half for an utterly enjoyable highlight track. The brutal ‘There Will Be Blood’ uses thumping intense rhythms and pounding drumming into a frantic mid-tempo series of thrashing riff-work buzzing along to the utterly frantic drumming blasting through the utterly frantic and chaotic rhythms twisting through the solo section into the finale for a truly frantic and enjoyable effort. ‘Violent Mind of Hate’ takes a thumping mid-tempo drumming intro into a thrashing mid-tempo series of tight thrashing riff-work and pounding drumming charging along on a fairly steady pace that launches into the molten solo section on though the charging final half for a decidedly decent effort. ‘World's Dead Side’ uses a swirling series of riffing building to a frantic charging pace with plenty of thumping rhythms buzzing along with the twisting riff-work blazing along with the fiery solo section and extended instrumental interludes leading through to the extended second half on through the finale for an over-the-top and explosive highlight.

The second half carries on the good-will from the first half. ‘Bringer of Torture’ uses a droning bass-line intro that settles into a fine mid-tempo pace with steady riffing and plodding drumming that keeps the same rhythms charging along throughout the same mid-tempo pace leading into the fiery and frantic thrashing through the blistering solo section on into the final half for an awesome finish to a bland beginning of this one. ‘Protectors’ features thumping stylized riffing swirling through a steady up-tempo pace with pounding drumming and frantic blasting chugging throughout the steady patterns along the sprawling mid-section rhythms as the frantic rhythms fire through the solo section into the finale for an enjoyable if not spectacular effort. ‘Executio Bestialis’ features a tight mid-tempo series of buzzing riff-work blazing away into scorching up-tempo rhythms thumping along to utterly blistering patterns charging along through utterly infectious riff-work dripping with plenty of speed into the blazing solo section and on through the chaotic final half for another engaging highlight. ‘Blooded Past, Burning Future’ blasts through explosive, tight rhythms laced with blistering drumming and explosive buzzing riff-work through utterly frenzied patterns leading through the solo section and continuing on into the frantic finale for a fun, engaging short bruiser. Lastly, the epic album-closer ‘Gilles de Rais’ takes a slow-building twist through the steady rhythms and mid-tempo churning riff-work that explodes into the raging series of thrashing riff-work that keeps the insane blistering speed continuing on throughout the extended mid-section patterns carrying on into the chaotic solo section and keeping the extended speed driving throughout the elongated final half to truly end this on a spectacular ending note highlighting the grandness of this one in fine fashion.

This here is a near-perfect assault of blistering, finely-formed thrash that plays with such conviction and enthusiasm that it can win over any audience out there and perfectly paves the way for the band to set out on their career, leaving this one to obviously settle in so well for revival thrash fanatics or fans of the old-guard looking for the young generation to make an impression.

Does it sound good? Order from here:
https://www.facebook.com/mazeofterrorthrash
Posted by slayrrr666 at 10:54 AM