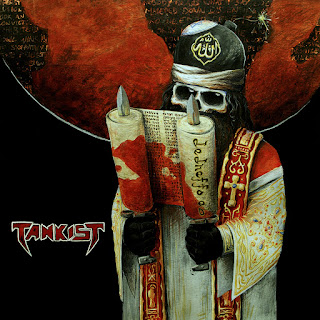 The new EP from Estonian thrashers Tankist is a somewhat enjoyable and appealing effort if not exactly a stand-out piece of thrash metal for the most part. Based around lively, mid-tempo riffing with a heavy, thumping drum-based backbone, by-and-large this one comes off rather nicely here without really generating much else along the way here as the majority of the tracks simply plod along at overall pretty bland arrangements. It does manage to get to a few rather engaging elements along the way here when the band picks up the tempo and delivers some fire in their work, but for the most part the group isn’t too concerned with the bigger rhythms or even attempting to go for the revivalist school of arranging which keeps the work far too slow and plodding to really get going out of second gear.  Along with the light production that manages to keep this one feeling a little too muddied and one-dimensional by keeping the instruments way too jumbled together to really stick out further, it’s got some decent elements but has some pretty big flaws to it.

Though there’s certainly moments throughout here where the band is certainly onto something in their sound, it’s mostly surrounded by bland, plodding material keeping it down for the most part and really only leaving this one for the least discerning thrash fanatics or those who prefer something outside the normal revival acts populating the scene.


Does it sound good? Order from here:
http://tankist.bandcamp.com/album/be-offended
Posted by slayrrr666 at 3:25 PM