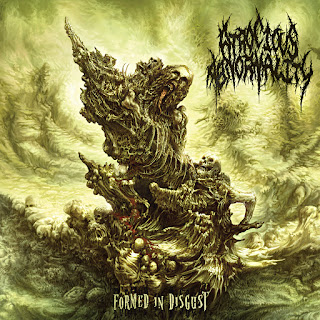 The second full-length from North Carolina brutal death metallers Atrocious Abnormality offer such a wide array of influences spanning the entire gamut of elements popular within the brutal death realm it become wholly enjoyable. Straight from the beginning here, this one manages to feature such a varied and completely over-the-top attack that features a wide range of work throughout here. Nominally under most brutal death metal there comes all the tight, ferocious riffing that contains all sorts of shredding, flesh-ripping patterns and ripping speed-driven rhythms that offer up the most pulverizing beats and riffs possible, all of which comes through quite nicely in the genre as this is among the fastest bands in this particular style. Alongside this explosive series of riff-work, there’s a large amount of spindly, technical rhythms at these dizzying speeds that are complex not only for the different arrangements as well as the manner of changing from the different styles and paces with expert precision, catapulting this one even further along the range with a dynamic style all wrapped together. Coupled together with a few explosive slams brought in with ‘Erotic Tales of Disembowelment’ as well, the wide array of work here makes for a completely varied and complete look that makes for a dynamic attack.

The first half gives this one plenty to enjoy about it. Opener ‘Failed Apocalypse’ uses the sampled speech to set up the slowly-unfolding onslaught of spindly technical riffing and battering bass-lines slamming together through the staggered mid-tempo paces leading nicely into proper first track ‘Exterminate the Apostles’ featuring battering drumming and inhuman blasting alongside charging up-tempo series of technical riff-work full of tight, speed-driven rhythms and battering drumming charging along into the heavy slams featured in the spindly riffing of the final half for a dynamic, blistering effort. ‘Storm of Ash’ takes a steady stream of blasting drumming and tight chugging rhythms building into a slew of frantic, technical riffs slowly taking the frenetic rhythms along faster speeds with charging intensity erupting through blistering speeds slamming into the finale for a truly spectacular highlight. ‘Erotic Tales of Disembowelment’ weaves a strong series of spindly technical riffing and blasting drumming alongside a tight, thumping series of slams chugging through the series of frantic, mid-tempo segments full of dexterous, diving technicality in the riffing carrying through into the final half for another spectacular effort. The title track takes on blistering spindly riff-work and frantic blasting alongside the tight, blazing speed-driven rhythms charging along through the choppy rhythms carrying into the utterly relentless drumming bringing the frantic speeds along the finale for a strong overall effort.

Likewise, the second half here follows the first half rather nicely. ‘Bound for Damnation’ uses the lengthy sampled storyline intro that turns into blistering drum-work alongside dexterous riffing change-ups and tight, charging paces throughout with a series of blistering razor-wire rhythms savagely razing through the occasional slam blasting through the final half for a highly enjoyable track. ‘The Inevitable Undoing’ utilizes choppy drumming blasting throughout the series of spindly riffing full of tight, frenzied sections providing the blistering speed and choppy rhythms blazing throughout the series of scattered patterns dripping with the frenzied slamming through the finale making for another strong highlight effort. ‘Echoes of the Rotting’ blazes through a series of strong choppy technical riffs with the thumping rhythms taking the tight, frenetic riffs alongside the furious blasting drum-work full of dexterous pacing changes with the dynamic riffing covering the changes throughout the final half for overall-back-to-back highlights. Finally, album-closer ‘Incestry’ starts with a bluegrass-banjo intro before diving into a pummeling series of tight rhythms and utterly dexterous technical patterns filled with varying tempo changes with the riffing flowing through a series of utterly blistering rhythms alongside the dive-bombing patterns throughout the finale for a truly explosive finishing note here.

As there’s not a whole lot of overall flaws here and plenty to enjoy from the varied and comprehensive attack featured here that has so much to enjoy containing nearly everything possible in terms of brutal death metal that this one is completely appealing for any and all fans of the style or those that simply enjoy good, heavy extreme metal.

Does it sound good? Order from here:
http://www.comatosemusic.com/store/product_info.php?cPath=56&products_id=5959
Posted by slayrrr666 at 2:29 PM