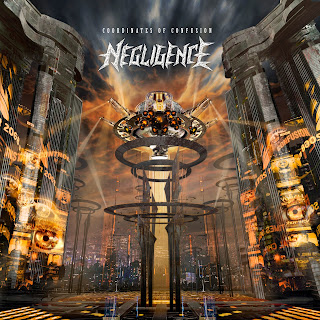 The second full-length from Slovenian thrashers Negligence offers a fairly engaging and enjoyable mixture of thrash throughout here that makes for a pleasing and engaging listen. Essentially taking the cue from most modern thrash acts in utilizing the basic riff-work and driving drumming from the classic Bay-Area scene, at it’s core this is a steady revival act intent on focusing more on driving the rhythms along rather than flashy riffing or complex patterns. Instead, it tends to save that flash for their explosive soloing throughout the album, offering up plenty of engaging work with the additional use of light power metal-styled rhythms that give off sparkling bits of melodic flurries alongside the tight thrash. Offering a nice groove alongside the raging thrash riff-work, it gives this one a steady, straightforward series of rhythms that make for an overall enjoyable time here without much really holding this back beyond this one singular attack-pattern. This one doesn’t really change up much beyond the straightforward attack, keeping this one locked into a more one-note than initially expected as the variation is more centered around tempo and pacing rather than in terms of dexterous riff-work which gives this a bland feel on the second half. As well, the epic ten-minute closer is a bit out-of-place with the band clearly uncomfortable stretching their style out to that distance when their other songs were tighter and more concise which isn’t the case with that one particular track and sticking out quite obviously. Beyond these two factors, there’s not much else wrong here.

The first half here nicely sets up the album’s qualities from the beginning. Intro ‘Mind Decay’ takes immediate rumbling drumming and scorching intense riffing with plenty of dynamic rhythms pounding long to the melodic leads running alongside the explosive drumming driving the charging mid-tempo paces through the solo section and into the charging finale for an explosive, highlight-effort opening blast. ‘Screaming Fear’ features charging riff-work and thumping rhythms driving along blistering paces with melodic leads bringing along tight, pounding rhythms scattered with the melodic runs driving the solo section on through the charging final half for another exciting and ripping thrasher. ‘Addicted to Aggression’ takes rumbling rhythms and tight patterns with scores of heavy mid-tempo patterns charging along at a straightforward chug and plenty of pounding drumming carrying through the solo section and taking the scalding rhythms through the finale for a decent enough effort. ‘Disharmony’ uses a scalding grooving chug riff with pounding drumming along a dynamic stylish mid-tempo charge with plenty of heavy rhythms keeping the straightforward crunchy patterns through the scalding solo section on through the final half for another stellar highlight. The mid-album instrumental breather ‘The Way To…’ uses harmonious middle-eastern melodies over swirling guitar-work makes for a fine interlude that doesn’t really damage this one way or another.

The second half isn’t all that bad but doesn’t have as much enjoyable aspects as the first half. ‘Insane Asylum’ uses a stylish series of swirling rhythms over a galloping mid-tempo charge with plenty of thumping, driving drumming bringing along more intense patterns driving the charging rhythms along with the raging riff-work throughout the blistering solo section and on through the explosive finale for an exciting highlight. ‘The Q Box’ takes strong swirling riff-work and plenty of pounding rhythms alongside the stellar mid-tempo crunch offered with the heavy, thumping rhythms holding off the sprawling chug-riffing through the blazing solo section and charging throughout the final half into another strong effort. ‘Sickened’ uses a steady, mid-tempo charge with the pounding drumming keeping the intense rhythms along throughout the melodic early solo section and into a sprawling mid-tempo charge featuring plenty of driving riff-work with pounding drum-patterns keeping this driving into the secondary solo section finale for a decent enough offering overshadowed by the other great tracks elsewhere here. ‘Shark Attack’ settles nicely from a gradual lead-in to a steady series of charging mid-tempo riffing with plenty of pounding drumming and a strong series of chugging grooves leading into the solo section and through the finale for another strong effort overall. Lastly, the album-closing epic title track takes rattling drumming and a steady series of swirling riffing charging along at a steady pace with strong pounding drumming and a variety of extended varied sections offering tight, sprawling patterns and dexterous drumming leading into an extended acoustic guitar fade-out for the finale to end this on a decent-if-unsatisfactory note.

Though it’s somewhat undone by a few middling areas that in the grand scheme of things aren’t all that detrimental, this one more than holds itself up as a solid, engaging listen with plenty to like about it and earning itself a listen from those who cannot get enough revival-flavored thrash or are simply curious what other countries have to offer the market.

Does it sound good? Order from here:
http://www.indiemerch.com/metalbladerecords/item/11234
Posted by slayrrr666 at 3:59 PM