Lethal Steel - Legion of the Night 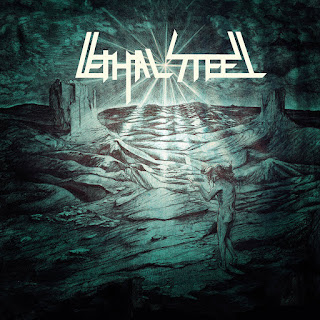 The debut full-length from Swedish metallers Lethal Steel manages to incorporate plenty of enjoyable elements together into a strong and dynamic offering of old-school heavy metal. Employing a rather simplistic and straightforward approach, there’s a steady rumbling blast of mid-tempo traditional heavy metal running throughout here in either mid-tempo charges or up-tempo gallops. Augmented by a pounding drum-attack and a powerful old-school production job that makes for a truly inviting atmosphere here full of melodic rhythm runs and toughened riffs which makes this a rather enjoyable old-school affair. That there’s a fine energy throughout here keeps things running smoothly enough for a heavy feel here where the few melodic runs along the way make this become all the more listenable. Though there’s plenty to like here with this one’s core sound, there’s a few rookie mistakes to be found here. The fact that the band is clearly much more adept at the quicker, more brooding and simplistic efforts is quite on display here where the bands’ better efforts are the shorter tracks while they haven’t figured out how to make the longer tracks more interesting. This is clearly a band more at home in the three-to-four minute range as those are clearly the best tracks on display while the few longer tracks that clock in over five minutes tend to just ramble on and meander to their finish which takes a lot of the stead out out of their rhythm-work. As well, the same-sounding paces are featured quite liberally here which makes for some pretty bland times where the songs end up sounding the same.

The first half here gets this off to a strong start. Opener ‘Sirius’ features a droning series of swirling riffing rampaging metal pace with mid-tempo drumming and strong melodic riffing throughout with plenty of fiery rhythms and rumbling bass-lines leading into the strong solo section that leads into the charging final half for an intriguing and enjoyable opener. ‘Nattsvart’ takes a steady thumping drum-beat into a volley of galloping riff-work and pounding drumming alongside powerful melodic rhythms taking plenty of fiery patterns and charging tempos along through the rumbling solo section with plenty of fiery riffing into the finale for a highly enjoyable highlight. ‘Rosier’ features thumping mid-tempo rhythms and volley of mid-tempo riffing settling into a fine pace offering a strong series of sturdy riff-work with plenty of tough rhythms and steady drumming that keeps this rumbling along through the solo section into the final half for a fine effort overall. ‘Warrior’ features swirling tremolo-picked patterns and tight, thunderous drumming building into a thumping up-tempo gallop offering plenty of tight, thumping rhythms from the stellar riff-work offering plenty of furious melodies alongside the fine solo section leading into the strong charging finale for the album’s best overall track.

While slightly lower, the second half is still a decent enough series of tracks. ‘Night of the Witch’ offers a droning intro with simple, melancholy riffing and plodding drumming turns into a fine mid-tempo gallop with tight rhythms plenty of melodic flurries coming through the sturdy riff-work with the extended solo section carrying through to the final half for a decent enough effort. ‘Into the Void of Lucifer’ features a simple, rocking riff working into a fine mid-tempo gallop with plenty of pounding drumming carrying the tight riff-work and strong rhythms along through a series of explosive melodic flurries into the sturdy solo section and on through the finale to make for a rather enjoyable effort. ‘Nocturnal Seductress’ uses a steady rocking mid-tempo rhythm with plenty of stellar up-tempo riffing and pounding drumming that brings the tough, sturdy rhythms along into the galloping paces along the fiery solo section and on through the final half for another rocking effort. Album-closer ‘Demon from the Past’ takes a charging up-tempo gallop with strong melodic riffing and plenty of  stellar melodic rhythms rumbling along with the tight patterns and rock-solid drumming keeping the mid-tempo gallop along through the solo section and carrying into the fiery finale for a solid enough ending note.

Though there’s some rookie mistakes to be made here, they’re certainly elements than can be fixed in the future as the band carries on here as there’s plenty of enjoyment to be found with their enjoyable old-school style, making this certainly a band to watch for fans of traditional metal or those looking for classic, appealing music.

Does it sound good? Order from here:
http://www.hrrshop.de/LETHAL-STEEL-Legion-of-the-Night-CD_1
Posted by slayrrr666 at 4:04 PM