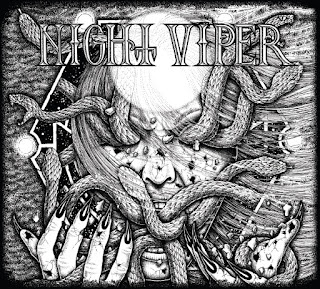 The first half here is a solid start to things. Opener ‘Night Viper’ slowly fades out into a steady mid-tempo series of riffing with strong, crunchy riffing and steady drumming that brings along a fine mid-tempo pace with a series of fiery, thumping rhythms through the solo section and carrying the energetic paces through the final half for a solid opening blast. ‘The Hammer’ takes strong mid-tempo riff-work and a steady thumping series of drum-works through the fine mid-tempo series of toughened riffing with plenty of energetic rhythms carrying this through the steady, toughened riff-work into the finale for a decent enough effort. Their epic ‘Curse of a Thousand Deaths’ takes an extended series of droning guitars and soft vocals through an endless, lifeless sea of bland riffing lilting on before finally mid-way through turning into a more traditional mid-tempo crunch with energetic rhythms and lively guitars flowing through into the final half for a decidedly and remarkably split song. ‘Run for Cover’ features thumping drumming and straightforward riff-work offering plenty of tight, crunchy patterns alongside the more energetic outbursts that run alongside the explosive rhythms of the solo section and continuing through the crunchy riff-driven finale for a fun highlight. A far better epic in ‘Warrior Woman’ features a lengthy droning intro running through a sluggish pace that nicely turns into a solid series of crunchy mid-tempo riffing and energetic drumming that keeps the solid paces driving along with the pounding drumming and stylish rhythms run along through the solo section into the final half that’s a bit more traditional-sounding but still somewhat too long.

The second half here is an enjoyable and breezy part without the epics weighing it down. ‘Faces in the Mirror’ rages through a blistering series of up-tempo drumming thumping along to the tight, full-throttle tempo riffing keeping this one on-track and firing along to the generous energetic rhythms of the fiery solo section and carrying along through the blazing finale for a fun, fiery offering. ‘Never Be Enslaved’ utilizes rolling drumming and a solid mid-tempo charge with sterling melodic rhythms running throughout the tight crunchy riffing leading into the energetic solo section and flowing throughout the tight crunch in the finale for an engaging overall effort. ‘Dagger in Hand’ takes a thumping bass-line and a steady drum-beat into a tight mid-tempo crunch with plenty of sprawling melodies throughout as the steady mid-tempo paces feature along into the solo section with the steady rhythms continuing through the final half for a lackluster effort overall. Finally, ‘The Wolverine’ features a steady mid-tempo rhythm with tight riffing and pounding drumming that continue on through the the steady rhythms alongside the nice series of up-tempo rhythms with plenty  of energetic rhythms into the solo section and on through the finale for a fine ending note here.

Despite a few small areas featured within that showcase a band’s beginnings and how they’re coming up in the genre, this is a pretty enjoyable straightforward blast of energetic old-school heavy metal that is all the more enjoyable for displaying a somewhat and slightly darker edge than their contemporaries and leaving this a fine band to look into for revivalists or those with a fondness for classic heavy metal.

Does it sound good? Order from here:
https://www.facebook.com/nightviperband?fref=ts
Posted by slayrrr666 at 2:17 PM