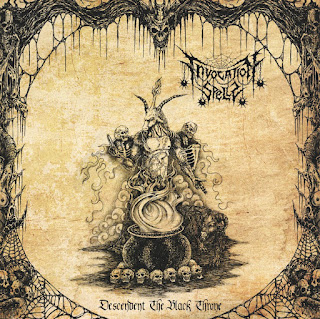 The second full-length from Chilean black/thrashers Invocation Spells manages to get some enjoyable elements featured within here with the old-school tone mixed alongside blazing thrash rhythms. For the most part here, this one is simply based on blazing old-school black metal with a raw edge here that makes the band sound that much more darker and primitive than expected. Firing off volleys of impressive tremolo-picked patterns that pack that brimstone-scented touch so heavily present in the Norwegian scene, this here is mixed with a generous dollop of South American primeval-sounding production that helps add to the general air of dirty old-school flair here which ends up making this one so much fun throughout here. With this old-school style played nicely alongside thrashing patterns with that kind of up-tempo pace from the thrash rhythms, there’s a whole lot to really enjoy here.  While there’s some good here in keeping the tracks short with that punk-ish attitude with their compactness, it does lower the second half somewhat as the simplicity sticks out somewhat from the first half and making the album come off a little  unevenly here, but that’s of minor consequence.

The first half gives this a strong hit of what’s to come. First up ‘The Betrayal of Bastard’ features swirling riff-work and steady rhythms along through the mid-tempo rhythms featured with the rattling old-school thrashing carrying along through the vigorous up-tempo riffing running along throughout the steady final half for an engaging opener. ‘Lust to Death’ uses immediate thrashing riffs with plenty of fiery mid-tempo tremolo patterns charging alongside pounding drumming carrying the bouncy up-tempo paces carrying the dirty thrashing riffs into the finale for a decent enough shorter thrasher. ‘The Black Rite’ uses sparkling tremolo riffing and explosive drumming through a savage up-tempo thrashing paces with the swirling, razor-wire tremolo riff-work keeping the fiery tempos going along through the pounding drumming charging through the final half for a much more enjoyable shorter effort. ‘Occult’ blasts through buzzing tremolo patterns and rocking up-tempo thrashing rhythms featured into a steady mid-tempo pace with hard-hitting riffing throughout as the furious rhythms alongside the charging finale which makes for another enjoyable effort.

The second half here is a slightly lower but still enjoyable part of the album. ‘Under Shadows of Pentagram’ features a stylish tremolo riff thrashing through the charging up-tempo paces as the blasting drumming and rocking energetic rhythms carrying the simplistic arrangements through the up-tempo final half for a rather enjoyable offering. ‘Revenge of the Serpents’ utilizes a simple, rocking thrash riff with fiery tremolo patterns pounding away with scores of dynamic drumming keeping the charging energy throughout leading into the raucous, dirty riff-work in the finale for an impressive and enjoyable punk-laced thrasher. The title track rages through a soaring series of tremolo-picked rhythms and dynamic pounding drumming taking the simplistic energies throughout the utterly frantic rhythms featured throughout the charging, raucous rhythms in the final half for another strong effort. Finally, ‘The End of Time’ brings along the horror-film sampled intro that slowly turns into a series of buzzing tremolo riffing and pounding, simplistic drumming that continually races through the series of frenetic rhythms through the blazing tremolo riffing that thrashes along into the finale for an impressive lasting impression here.

Though there’s some rather enjoyable fun to be had from their old-school black metal styled thrash that comes off nicely, the weaker sections here do stick out enough to make this seem a little more likely for those only interested in this kind of ravenous South American style of extreme metal or those looking for some new form of black/thrash metal.

Does it sound good? Order from here:
https://www.facebook.com/InvocationSpells/timeline?ref=page_internal
Posted by slayrrr666 at 3:35 PM