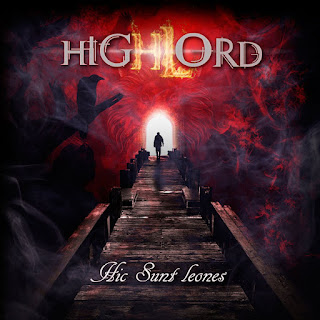 Artist: Highlord
Release Title: Hic Sunt Leones
Year: 2016
Label: Massacre Records
Genre: Power/Heavy Metal
Tracklisting:
1. Time for a Change
2. One World at a Time
3. Be King or Be Killed
4. Let There Be Fire
5. Hic Sunt Leones
6. Wrong Side of Sanity
7. Feathers to a Bird
8. Warmight
9. I've Chosen My Poison
10. Once Were Immortal
11. Full Circle

Founded as Avatar in 1997, Italian heavy/power metallers Highlord quickly adapted their new moniker and have steadily increased their profile as one of the country’s finest purveyors of this style. Having lost founding guitarist Stefano Droetto for his replacement Marco Malacame, the group’s eighth full-length effort was released June 24, 2016 on Massacre Records.

With a catalog as deep as theirs clearly is by now, it’s no surprise what’s to be found here which is what makes this one so enjoyable. Immediately assaulted with a series of melodic rhythms around which the band wraps a strong series of heavy, thumping patterns into a stylish mid-tempo charge, it’s quite obvious that the band is quite adept at firing off this style of tight, thumping heavy metal laced with the fiery melodies derived from the power metal scene. It’s all quite enjoyable with the melodic arrangements generating the kind of steady arrangements and rather fine keyboard accents offering enough of a neoclassical touch that it’s allowed to offset the remaining tracks and their relentless pounding charge in those sections. With a deeper, churning drive in the drumming and generating a tighter, more focused rhythm section that contains the necessary thumping drive that employs a more traditional metal experience with the group generating quite a significantly heavy backbone to display those melodic flurries. With the band’s experience driving these along into quite enjoyable tempos and paces that manage to hit the proper frenzy at the right time to move this one along, it’s all a testament to their proficiency at building these elements together into a rather enjoyable time, though the band does hit a few sour notes especially in the genre-staple ballad. It’s far more plodding and dragging than the majority of their other tracks not on purpose but the main rhythm is just not suitable for a ballad, the clean vocals are weak and buried in the mix and the acoustic rhythms are placed through cliched patterns that seems like the band running through the motions rather than displaying any kind of passion or fire which is displayed prominently throughout here. It’s really the album’s biggest stumbling block that holds it back.

Beyond one minor hiccup to be found here, there’s much more impressive work on display here that makes this one of the more enjoyable and consistent acts in the style for giving yet another solid album which makes this one highly appealing to fans of the band in the past or those who enjoy this melody-tinged heavy/power metal style.

Does it sound good? Order it from here:
http://www.metalmerchant.com/detail.asp?request=CD&orderno=200947&bandname=HIGHLORD&genre=Heavy&ID=
Posted by slayrrr666 at 10:44 AM