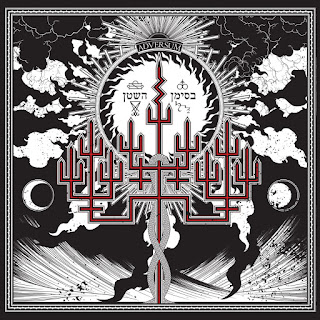 Founded by mainman S. in 2014, the German black metal band Adversum was from the very beginning an overt and blasphemous Satanic act beginning with the first songs composed at the act’s infancy. Joined by drummer MDB  and session member R. the is finally ready to unleash their debut album released June 30, 2016 by Inferna Profundus Records.

From the onset this here is a tried and true old-school black metal act with plenty of traditional elements found there. Firing away tight, intense tremolo rhythms around a buzzing, mid-tempo gallop while occasionally getting up into a more fiery, energetic realms gives this a rather dynamic appeal to the old-school crowd while generally making the album quite nice overall. There’s plenty of sprawling, atmospheric accents along the way with the kind of slowed-down charges that come across nicely as well by acting as solid buffering segments against the infernal blasting on-display as there’s a generous amount of those rhythms featured here when the album also gets back into the traditional trappings with the swirling tremolo-picked patterns and blasting drum-work. All told, this creates a nice, infernal mixture that’s quite appealing and generally rewarding of it’s old-school approach, though the album does have a few minor issues. The brief running time is something to take into consideration, feeling much more like a demo release or even an EP with the few tracks here which is slightly problematic as the album is really getting going and finding the band just beginning to hit their stride with some great tracks leading up to the finish only for the album to suddenly be over, and while it does work in wanting the listener to want more it does feel short-changed as a result. Again, so effectively calling out the old-school way of doing things here might be a little tiresome though not as tiresome as the album’s final track which is a pointless noise collage that sounds more appropriate on an ambient or industrial release and seems too out-of-place on the album as a whole. Still, for the most part this one isn’t that bad of a release.

Despite a few minor missteps here and there, the fact that there’s a lot of good, solid work to be found here on this one really does make it a far more engaging and enjoyable first-offering than expected making this one a rather appealing listen to all who appreciate and support the second-wave old-school style groups in the underground.

Does it sound good? Order it from here:
http://infernaprofundusrecords.bandcamp.com/album/in-the-sign-of-satan
Posted by slayrrr666 at 1:05 PM