Temple of Evil - The 7th Awakening 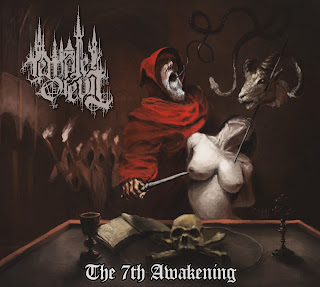 Summoned into existence in mid-2008, Cypriot black metallers Temple of Evil has toiled away expressing its philosophy and its main ideology as it is influenced by personal esoteric thoughts which has kept this debut release until now. Initially an independent release in December 2015, the effort is re-released on January 7th via Deathhammer Records and features eight tracks of pure unadulterated black metal which have been summoned as an expression of personal meditation in each individual's reanimated inner spirits.

For the most part this here is a rather dynamic and impressive assault of occult-laced black metal with a vicious, dynamic edge. Ragged, raw riffing and dexterous, dynamic drumming dominate this release as the simplistic tremolo patterns become the focal point here swirling along with a fine melodic edge that keeps this with a solid, buzzing tone which lets the imminently evil vocals produce that Occult flair throughout the tracks here where they shift from the raspy shrieks to a majestic grand choir and it completes the picture perfectly. Blasting away with abandon, as the drumming helps to catapult these along tremendously alongside the raw riff-work, though that there does start in with the album’s downfalls as the low-budget scope does rear itself in here quite early on. Despite featuring a series of dynamic and rather ferocious charge throughout the music whether it’s marching along at a mid-tempo gallop or going for the slower sprawling sections, regardless the tinny nature of the work as a whole does come off as slightly distracting with the cardboard-box-sounding blasts alongside the remaining rhythms displayed here. As well, the fact that the band does delve into the epic realms on several of their tracks does tend to showcase a small problem in the repetitious riff-work being exposed here with the band having to run through extended, overlong intros that go on longer than need-be or simply repeat the same patterns and arrangements in order to get the running time to their chosen length. It’s a more forgivable issue here given that this is a debut effort, but it does come up in here.

While offering up plenty of enjoyable and oftentimes quite vicious elements here, there’s a few small flaws here that do creep up enough here that knock it down enough that it’s reserved instead mainly for those curious acts from that region considering their scarcity or the most devout of occult-themed old-school black metal groups.

Does it sound good? Order it from here:
https://templeofevil.bandcamp.com/releases
Posted by slayrrr666 at 1:08 PM