Game Over (It) - Crimes Against Reality 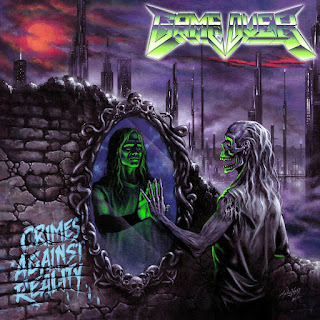 Initially formed in 2008, Italian thrashers Game Over quickly formed an attraction to old-school thrash as well as a love for similarly old-school horror films which has been a part of their sound from the beginning. Not really offering much deviation or change-ups, this ripping and energetic third album came out April 1, 2016 from Scarlet Records is yet another incredibly enjoyable and rousing blast of revival-inspired thrash metal from one of the most impressive bands in the style.

As has been the case with their previous albums, this one offers a lot to really enjoy with the guitar-work which is packed with tightly-wound, intense rhythms. These are paced much like true speed and thrash running along in tight formations along frantic paces in that these tracks are played in a boundless sense of energy which makes them work quite nicely. The density layered across the rhythms here makes for quite an effective punch by keeping the entire thing in urgent mode with the exception of a few smartly-placed breakdowns which act as melodic breathers before going back to those more intense rhythms throughout this featuring fiery, spindly-delivered leads along the solo sections while placing just enough melodic crunch in the main sections. These tightly wound rhythms offer plenty to like in terms of raging solos and pounding drum-work to give a really kinetic offering, while there are only a couple things that stick out here. One of those is the fact that there are so many tightly-wound rhythms that the songs are all short, tight thrashers without really getting any room to grow that it never really shows off any variation in its rhythms. A few tracks display technically-complex rhythms but that’s about it in terms of variety as it never takes advantage with its density which results in some reused patterns to keep going along and holds this one up. The other minor bit of contention here is the real lack of unique rhythms throughout, tending to utilize very commonly-used patterns that further the bands’ familiarity rather than uniqueness. This isn’t a detrimental flaw though and doesn’t impact this all too much.

There’s a lot to like here with this enjoyable, energetic release that really doesn’t have a lot wrong here and manages to get a lot of ravenous thrashing in order which makes this an addictive outing overall. Though it can come off a little familiar at times and doesn’t really deviate much from the norm, it still gives off an infectious attitude to make for an enjoyable experience for any thrash fan to enjoy.


Does it sound good? Order it from here:
https://gameoverthrash.bandcamp.com/album/for-humanity-re-release-2015
Posted by slayrrr666 at 1:19 PM