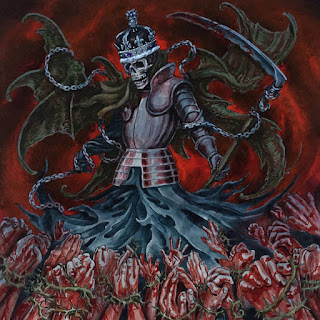 From the obscure backwoods of Kentucky, black metallers Order of Leviathan have been bringing an infernal quest for total darkness into their sound from their inception in 2012. One of the few black metal bands to actually employ a triple-guitar attack in their sound, this self-released debut is released August 5, 2016.

In order to accomplish their feat, the group opts for the basics here in really letting this one channel the second-wave of Norwegian acts throughout. With their triple-guitar ability, they’re able to craft solid swirling tremolo-picked rhythms leading over the tight, chugging riff-work stuttering along at a solid mid-tempo pace that brings out a crunchy series of rhythms quite well. On the rare occasions when the tempo goes for a more blasting, vicious approach there’s a definite fire and enthusiasm to the material which is quite striking with the tremolo patterns getting more frantic and fiery alongside the blasting drum-work, though since the band stays within that mid-tempo realm quite often it’s reliance on those crunchy patterns and swirling tremolo rhythms creates a far more melodic bent to their music than expected. It also really helps to settle the group into a straightforward gallop that lets their pounding drumming and tight swirling rhythms keep the charred, blackened feel throughout here alongside the faster efforts. While it does seem to delve a little too closely to the same general patterns and straightforward approach the main element at play here is the group’s inclusion of laid-back and plodding rhythms with lighter vocals that don’t really evoke any kind of true black metal aesthetic within the music and comes off more like a slightly more extreme variation of modern metal convictions. It’s not wholly detrimental but it’s more of the jarring juxtaposition of these elements with the rest of the material that causes them to stick out more.

Though on the whole the band certainly has a lot to like here in regards to its varied approach and the times where it’s fiery blend of influences come together into a great whole, the few small problem areas here tend to keep this one relegated mostly to fans of the American black metal scene or ardent supporters of all second-wave worshipping groups.

Does it sound good? Order it from here:
http://orderofleviathan.bandcamp.com/
Posted by slayrrr666 at 12:54 PM