Votan - At One with the Serpent 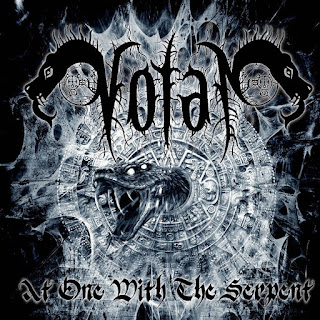 Initially formed in 2011, Texan epic black metal horde Votan has struggled to keep its lineup consistent over the years, offering a rotating list of musicians before finally settling on their current quartet configuration. Going straight into the fray, the group now offers it’s debut full-length independently July 1, 2016 with a re-issue July 15, 2016 on Sepulchral Silence.

There’s a lot to like here as the album manages to work out a rather nice, raw sound here to go along with the frenzied epic work present for the most part, which is a nice part of the appeal overall here. With the rather tight riff-work elsewhere on display, it’s quite an impressive racket to leave the rattling, raw production for the main riffing and the drum-work on display here which is what really drives this one. Featuring the rather typical swirling tremolo patterns in conjunction with that raw style makes the music a lot grander and more majestic than would typically be the case. This riffing style ends up making it into a slightly more progressive area than expected here due to the album’s mostly overlong arrangements that further the epic mindscape where it’s built upon the varied tempo changes and dynamic patterns in the arrangements to make an epic-sounding track.  Offering plenty of backing keyboards that really further this large, grand style of work by going into the overloaded-into-the-background format here where it’s all based on the constant blaring in the background which is then furthered with the raging, blaring tempos to make this seem a lot bigger and grander than it really should be. While this is certainly a nice overall main attack that’s utilized here, the fact that the album is so raw does strike this one down somewhat with the rattling, weak-sounding drum-work not unleashing it’s full-power or the way in which the buzzing keyboard work dominates and overshadows the light guitar-work in the background of it all. It's also not really helped with the fact that there's several songs that are a bit too long that aren't really needed to be that way, tending to make this seem like an epic somewhat more on virtue of the length of it's compositions rather than the overall effect of it's music. This isn’t a truly detrimental or damaging flaw, but it is noticeable to a large degree here.

Though it’s got some minor flaws on display here that aren’t really all that detrimental to it’s overall enjoyment and which is mostly a case of debut jitters that should get ironed out as they continue on their career, in the end those are only enough to make this really appealing to fans of raw symphonic black metal or epic metal of this sort.

Does it sound good? Order it from here:
https://sepulchralsilencerecords.bandcamp.com/album/at-one-with-the-serpent
Posted by slayrrr666 at 2:35 PM