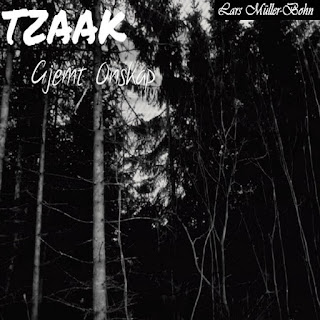 A mysterious one-man band, Norwegian atmospheric black metal project Tzaak has quietly arrived and spread it’s brand of pleasing ambient themes and atmospheric black metal together into a solid whole. Coming together for it’s debut effort, the moving and dynamic release was initially independently offered June 28, 2016 before a re-issue July 10, 2016 on Sepulchral Silence.

At the onset of this one, it’s pretty apparent that there’s a lot of epicly-arranged rhythms here with this one tending to utilize the rather straightforward and one-shot riffing style here. Offering a simplistic, buzzing-style of tremolo-picked riffing swirling along at a majestic, mid-tempo pace here there’s plenty of warm, naturalistic melodies at play within these rhythms as the straightforward mid-tempo plod that the majority of the album is played at manages to generate a fine sense of the overt atmosphere present here. With plenty of epic, majesty-laden melodic accents from the riff-work added alongside the album’s tendency to navigate excessively overlong and majestic atmospheric accents that are able to make this feel far more epic with it managing to travel alongside these overlong arrangements with plenty of tight-if-overly-simplistic arrangements generated throughout the tracks and some nicely-placed keyboard melodies that aren’t overworked here. Even when the album does kick it up in terms of the arrangements and tempo here, there’s still that overly warm and majestic feeling here that comes off so well in regards to settling the epic atmosphere, and there’s overall a lot to like here. There’s a minor issue here in that the tracks, due to their epic length, tend to feature monotonous arrangements that aren’t all that pleasing, as many of the outros are stretched out over a minute or more with endless acoustic riffing or just plain dull elements that aren’t in the slightest enjoyable as they make it obvious the album’s being stretched out to that epic length. The brevity of the tracks is a minor issue, but overall not nearly as much as the other issue.

While it does wear it’s length quite heavily and features some rather bland moments that come from that, it’s still got enough enjoyable elements that show it’s got something enjoyable going on with it that this ends up being quite an appealing effort for fans of atmospheric black metal of all kinds or those that appreciate epic metal of this variety.

Does it sound good? Order it from here:
https://sepulchralsilencerecords.bandcamp.com/album/gjemt-ondskap
Posted by slayrrr666 at 3:28 PM