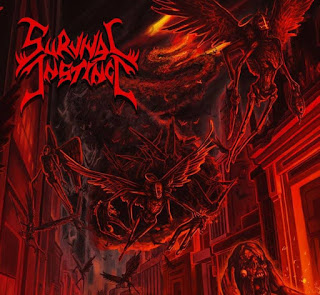 Coming together in 2013, Canadian thrashers Survival Instinct quickly managed to produce an EP release about a year later and have spent the remaining time forging their live reputation with scores of gigs and tours of their homeland. Now, two years have past and the band is ready to unleash their full-length debut, independently self-released August 20, 2016.

Taking plenty of cues from the Bay-Area style of attack,the main riffing attack here is taken along through the usually tight, crunchy patterns offered in that mode of attack which greatly benefits this one with the ability to offer up a nice amount of differing rhythms as the loud, biting guitar riffing is a dominant aspect to this one. Offering that explosively crunchy, fast-paced rhythm attack in conjunction with some rather nice mid-tempo work it creates a thumping, fiery atmosphere that really echoes the sound and vibe from that particular breed of the genre where it mainly offers up that mid-tempo crunch patterns with the occasional burst into a light chug style of riffing which comes from keeping this one steady, straightforward and unwavering in their attack. That does bring up the main strike against this one in the fact that there’s just nothing all that original on display here, running through the exact same general rhythms and patterns that were part of the Bay Area scene so much so that it doesn’t really offer up any kind of deviation from these arrangements which just seem to carry on throughout here. That really keeps this one down, as well as the fact that the rather simplistic riff-work is kept pretty cluttered where it doesn’t really generate the kind of infectious energy or enthusiasm that it really needs with the continuous mid-tempo paces and leaving the bands’ spurts into up-tempo fare to come in brief spurts overall. There’s not as much energy it develops here that overall it could’ve, and it basically sounds way too complacent on running through the past while not often enough generating the kind of energy it should’ve.

While there’s some flaws to be found here, some of that is inherently made out to be nothing more than just debut jitters and is somewhat forgivable while others aren’t as much and really do leave this one solely for the most undemanding of revivalist thrash aficionados or those that prefer a more mid-tempo pace to their typical thrash crunch.

Does it sound good? Order it from here:
http://survivalinstinct.bandcamp.com/album/hells-angels
Posted by slayrrr666 at 11:06 AM