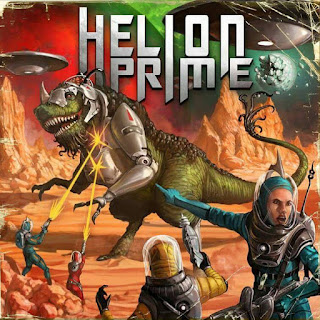 Artist: Helion Prime
Release Title: Helion Prime
Year: 2016
Label: Self-Released/Independent (Divebomb Records reissue)
Genre: Power Metal
Tracklisting:
1. Into the Alien Terrain
2. The Drake Equation
3. Life Finds a Way
4. Into the Black Hole
5. A Place I Thought I Knew
6. You Keep What You Kill
7. The Ocean of Time
8. Moon-Watcher
9. Apollo (The Eagle Has Landed)
10. Live and Die on This Day

Formed just a few years ago, Sacramento-based power metallers Helion Prime wasted no time in setting a course for their career, as their first EP was released just a few short months after forming. Now ready to release their full-length self-titled debut February 15, 2016 independently with a reissue on Divebomb Records August 12, this release comes loaded with special guests and total science-fiction driven lyrical matter.

This is a wholly enjoyable and dynamic release that manages to get a lot of enjoyable elements here out of the bands’ striking musicianship. Rattling off straightforward riffing in a slightly technical bent while showcasing the ability to drive out swirling leads rife with speed-driven rhythms or charging along at a steady mid-tempo crunch, this basic attack is quite appealing at the diversity it affords them with the ease of switching between these varied elements oftentimes with the same track for a great progressive edge. As the riffing is slightly-technical to begin with, that extra boost as well gives this one a rather impressive charge with the bands’ science-fiction themes as that extra boost from the technicality is meshed together into a series of impressive arrangements fully encompassing those themes and atmospheres to the fullest. This strong science-fiction attitude is further greeted by the nominal power metal melodies running throughout the riff-work and just simply makes this one so rousing and energetic with the band fully able to employ those elements together into such a cohesive, competent attack that the music’s varied moods allow for a diverse, well-rounded and highly enjoyable effort. There’s one slight problem running throughout the album, which results in the band tending to be such accomplished musicians here that the need for all the guests doesn’t really seem all that obvious with them all getting mostly buried in the album so much that it’s hard to pick out what they’re doing or why they’re even there to begin with. It’s all so nicely accomplished and polished that the guests seem superfluous and somewhat unnecessary here as they tend to drag out some of the songs on the second half a little longer than what they should’ve been, but it’s not nearly a detriment at all.

On the whole this is a wholly enjoyable and impressive debut effort that gets much more right than it does not, and for the most part this here really tends to come off on the enjoyable end of the spectrum and results in a fantastic debut that will undoubtedly appeal to all sci-fi-obsessed metal fans or those who prefer the energetic side of power metal.

Does it sound good? Order it from here:
https://helionprime.bandcamp.com/album/helion-prime
Posted by slayrrr666 at 3:29 PM