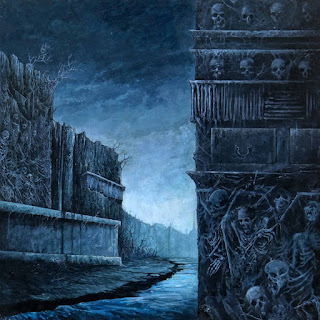 After a massive debut effort, Australian black/death metallers Temple Nightside has spent the three years since not only honing their craft but also swelling in members, growing from an initial duo into a quartet now. With mainman IV the only hold-over and surrounding himself with new members in second guitarist BR, bassist V. Kusabs and drummer Mordance, this second full-length is released August 5, 2016 on Iron Bonehead Productions.

Much like their previous effort, the sound here is one of old, slumbering beasts slowly rising to overtake the world and is a perfectly apt description here. The main rhythms are based around deep, churning low-slung riff-work that effectively plods along here while employing a vast amount of sprawling, darkened patterns which create a swarming mixture of death, doom and black metal elements throughout here. The cavernous approach and churning riffing within the dark tremolo arrangements give it a more old-school blackened death metal style approach that comes off rather sinister-sounding in conjunction with the murky production job. That leaves the slower tempos to really showcase the churning patterns quite well with the churning patterns getting to take up plenty of room within the arrangements that brings out their sludgy atmospherics quite nicely here and acts as a great balance to the selected up-tempo arrangements that are featured within here. While on the whole the music works solidly in it’s vile, churning ways the fact that the album seems to get interrupted by a variety of brief, bland instrumental tracks is really where it seems to stutter somewhat. The fact that they range from barely thirty seconds to two minutes makes for some questionable nature as to their inclusion, especially when they don’t really set up the following track and two of them are back-to-back only broken up by one’s follow-up track and it halts the momentum of the middle section somewhat because of the cramped nature of these confusion efforts. Still, that’s really the only big problem on the album as the rest of it works solidly.

Though hampered by one small rather odd inclusion where it’s little instrumental interludes seem too oddly inserted into the overall running order and packed together too closely to let their effect sink in, there’s still a whole lot to really enjoy about this one that makes it a solid choice for old-school black or death metal fanatics who salivate over this type of material.

Does it sound good? Order it from here:
http://ironboneheadproductions.bandcamp.com/album/temple-nightside-the-hecatomb
Posted by slayrrr666 at 11:31 AM