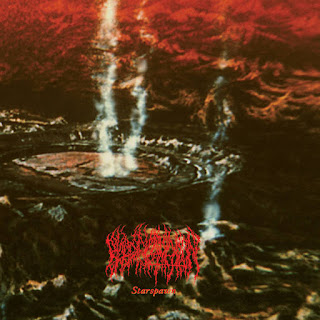 One of the genre’s up-and-coming heroes, Colorado death metallers Blood Incantation has built a steady stream of impressive releases that showcases their astounding blend of atmospheric and technically-challenging material. Rounding themselves into a four-piece now with the addition of Jeff Barrett as their full-time bassist, the group’s full-length debut is released August 18, 2016 on Dark Descent Records.

This here comes off as a ferocious, highly engaging effort mostly due to the propensity for dynamic, outrageous rhythms on display that give this such a varied, complex structure. Essentially at it’s core a death metal act, that allows for a series of dragging, churning riff-work with all the hallmarks of the old-school scene as it utilizes the sprawling, cavernous-style structure with it’s deep rhythms at slow, plodding tempos while battering away with plenty of tight, vicious drumming that gives this such a stylistic old-school approach and then throwing out a series of tightly-wound, technically-extravagant patterns on top to round out the experience.. That basic framework is then balanced out with the addition of ultra-slow, plodding sections filled with sprawling, atmospheric notes that wrangle out hints of psychedelic soloing alongside the churning, rumbling rhythms and the contrast between these elements is not only wholly apparent but also delivers a varied approach that’s hardly ever seen in the genre. The quiet, reflective atmospheric sections bumping up against the vile, blasting death metal is a rather ingenious and impressive mixture that gives this a variance not typically seen yet still manages to come off with enough of a semblance to either genre that there’s plenty to enjoy for fans of either style. In the end, that really leaves only the listener’s tolerance for such material as the main defining factor against this one, with it being based mostly on whether or not there’s any interest in one aspect of the band as the biggest selling point for it. The length might be an issue as well, with the band not really giving this one much of a chance to really showcase it’s chops with a thirteen minute epic to open this and an instrumental cluttering up the running time here, but these are all trife problems that aren’t all that worrisome.

Despite a few minor, barely worthwhile issues that crop up throughout this one it still has enough quality efforts on display to remain one of the more impressive and dynamic acts in the style and makes for a wholly appealing act for anyone looking to expand beyond what is normally considered death metal or other adventurous extreme metal fans.

Does it sound good? Order it from here:
http://darkdescentrecords.bandcamp.com/album/starspawn
Posted by slayrrr666 at 10:38 AM