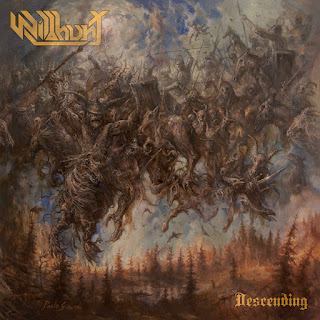 From their start in 2011, Austrian thrashers Wildhunt have clearly been indebted to their old-school influences and have brought them along only with a great bent towards technicality. Now finally ready to unleash their debut album  April 29, 2016 from Metal-on-Metal Records after a successful EP and a split release, this showcases their style and intensity to the fullest and starts them off on a great note.

From the onset this here is such a dynamic and appealing old-school sounding album that it really could’ve been brought forth from the 80s with it’s approach here. Ranging from tight, speed-metal crunch that permeates the tracks with a steady pounding charge that’s incredibly infectious to a strong series of blasting, full-throttle thrash and coming complete with some melancholic intros enhancing the song-lengths quite well, this attack is so enthusiastically old-school that it really should’ve been recorded back in the genre’s heyday. Even better, though, is that this approach is utterly mosh-worthy by itself before adding in the swirling technically-challenging riff-work that accompanies these rhythms which makes for a rather engaging experience with a frantic amount of speed-drenched patterns that also manage to show-off the kind of overt sense of showmanship within the music by being able to introduce all these different wildly-extravagant riffing patterns into the tracks which gives them incredibly varied tempos and pacing that gives off a wholly dynamic approach. This intense, calculated and varied approach is quite classy and manages to get quite a lot of positive marks for its overall performances yet does seem a little too clean and sterile to really fall in line with the aggressive and intense thrash acts, preferring mostly to adopt that mindset without taking on the attitude of those old-school groups that laid the foundation for their sound. While this is mostly just grasping at straws, it is a force that does need to be mentioned here since this does come up here.

For the most part this here is an incredibly enjoyable and dynamic debut that takes all the best qualities of old-school thrash and whips them into a highly enjoyable blend of technicality and class that this will undoubtedly quench any thrash fans thirst for more or those looking for technically-proficient acts without being egregious about it.

Does it sound good? Order from here:
http://metalonmetalrecords.bandcamp.com/album/wildhunt-descending
Posted by slayrrr666 at 10:54 AM