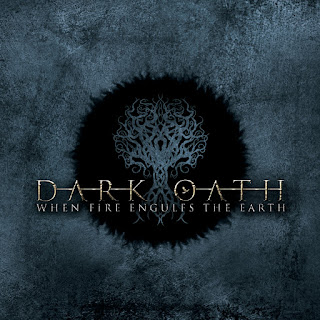 From their start in 2009, Portugese melodic death metallers Dark Oath have endured a rotating stream of musicians between releases, leaving guitarist Joël Martins as the sole original member. With vocalist Sara Leitão returning from the previous release and now joined by bassist Afonso Aguiar and guitarist Sérgio Pinheiro, the group prepares to unleash their full-length debut April 15, 2016 on WormHoleDeath Records.

The most obvious part about this album is the fact that from the start it really stacks on the epic tag with plenty of moments focused mainly on weaving that within the music as often as possible. Ranging from the utterly epic song-lengths to cinematic-style backing keyboards and even massive, majestic rhythms blaring away with a progressive edge due to needing to fill out those overlong arrangements, this release does sound quite massive and truly epic. It balances all this out with a fiery edge from the engaging and wholly melodic riff-work that employs a driving charge with the drumming that captures a death metal sound but yet flirts quite egregiously with power metal rhythms which keeps this focused on gorgeous melodies and tightly-wound rhythms for that warm melodic charge against the raging full-throttle tempos. With plenty of fun progressively-tinged technically-challenging patterns being played out here with the rhythms it all makes for a grand, stylish attack. The problems with the album surface again right from the very start, where you only have to look at the running time of the tracks for it’s complete total to see that the band clearly has problems with their writing. This is severely in need of trimming down as this is the epic kind of writing that’s exhausting overall rather than immersive as there’s times where the band will run through a dynamic section of the track then switch it up for no real reason other than to drag the running time out and make the tracks appear far longer than they need to be. Chopping off about five-to-ten minutes total here would do wonders for this album as it wouldn’t have to keep returning to arrangements simply because the track isn’t over yet and would still keep the epic part of their sound intact.

While this is a wholly overlong and incredibly bloated release that could easily do with some slight trimming-down, it’s a facet that comes with a debut album and might be a feature that’s fixed in the future so it’s not nearly as detrimental as it could’ve been and results in this being a solid choice for those looking for more melodeath in their lives or appreciate female-fronted extreme metal acts.

Does it sound good? Order it from here:
http://darkoathmetal.bandcamp.com/
Posted by slayrrr666 at 2:04 PM