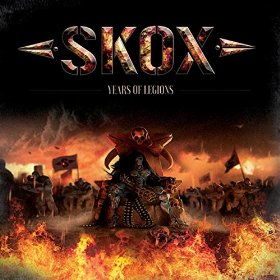 Toiling in the underground since 2003, French thrashers Skox have had very little output since their creation, spawning only a demo and an EP release five-years later before another six-year gap in releases until now. Finally ready to unleash their debut offering August 12, 2016 on most digital platforms, the bands’ efforts have served up a solid and serviceable debut offering..

From the beginning this here showcases itself as a rather frantic and tightly-wound effort with the short, stuttering rhythm patterns generating the main focus and drive here throughout the music which gives this a solid backbone here. This generates the kind of short, sharpened bursts of thrash which becomes quite frantic and generally far more vicious than expected as there’s a series of tight, vicious rhythms on display in association with the rattling drum-work and wildly-chaotic leads that are feverishly played over the whole effort that adds nicely to the frantic rhythms. Likewise, the shorter rhythms work well here in making for a routinely enjoyable mid-tempo chug to dominate the majority of the remaining sections of the album, and generally works quite well here by keeping the material up-beat and charging along with the bouncy tempos off-setting the raging rhythms into a solid whole. There’s a slight feeling here that the album could deal with a more pronounced set of intense tracks here as though those are where the band really scores quite well the fact that it’s drowned out by the tighter-yet-less-energetic mid-tempo sections causes this to drop off in intensity throughout the album which is slightly troubling when it really could’ve gone for a more engaging attack. Still, this one is a debut offering and does get a slight pass on that front as the band does get experience to even it out.

Though it does have some minor issues here relating to some inexperience issues at keeping material interesting and inviting over a full-on album, this is still a mostly serviceable and enjoyable effort that will mostly appeal to those who can overlook the flaws in their thrash or just generally enjoy the genre to a complete extent.