Idolatry - Visions from the Throne of Eyes 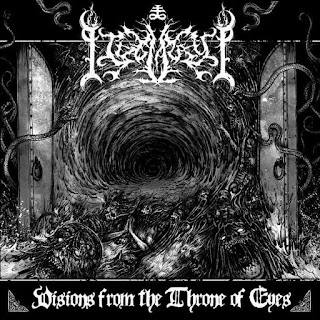 From the frozen north of Edmonton, Canadian black metallers Idolatry developed a ferocious reputation in their homeland on the strength of a vicious self-titled EP and numerous live performances over the years. Having honed their craft into a splendid Satanic brew, the quintet finally prepares their debut effort  on March 25, 2016 via Humanity's Plague Productions.

This here is a rather dynamic and mostly impressive effort that centers around the album’s overly simplistic riffing which marches forth with their traditional tremolo riffing. The cold, haunting atmosphere from these sprawling rhythms meshes incredibly well with the more simplistic and straightforward arrangements here and manages to bring about the colder atmospheres as it buzzes along at the faster tempos, while also allowing for the inclusion of melodic accents to bring out that frosty vibe even further. When given a more majestic, slower-paced feel here is where the album starts to stumble here as rather than effectively capture that slow, lurching crawl famous in most old-school black metal instead it just seems as though the band is devoid of energy and instead stumbles along half-heartedly which doesn’t seem to be the intended tone. Considering this is a debut effort, that has some leeway for it, but a little less forgivable is the somewhat jarring drumming which is quite busy at times and placed quite loud in the overall mix resulting in a constant clattering sound in the background that doesn’t really augment the music all that well even if the patterns and performances are played to perfection. It really just needed to be reigned in slightly, though overall it’s not all that bad of an effort at all.

Though there’s some minor debut jitters which is to be expected here, there’s still more than enough to really get out of this one that there’s a lot to like for fans of the frosty, slightly chaotic old-school black metal in this one though those who aren’t really forgiving of the flaws here should heed caution somewhat.

Does it sound good? Order it from here:
http://idolatryblackmetal.bandcamp.com/album/visions-from-the-throne-of-eyes
Posted by slayrrr666 at 3:37 PM