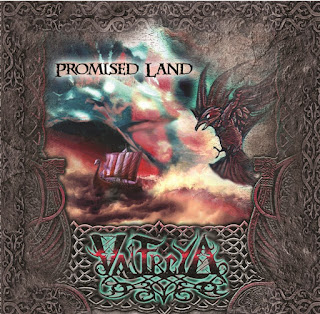 Trying to harness their sound, Canadian folk/black metallers Valfreya have spent many years being able to hone their unique and engaging mix of folk and black metal together in a fine mix of styles that continue to show inspiration and influence from Norse mythology. Having dominated the live scene in the interim, the group finally returns from a five-year gap with their self-released sophomore effort January 10, 2017.

Coming across immediately, the band offers a stellar outpouring of their chosen style as they offer some of the finest concoctions of their style as they can. The major focus here is on the tight, lock-step riffing that manages to simultaneously merge their stuttering folk leanings chugging along with the stellar tremolo-picked melodies of their black metal side. This framework makes the material here come off with a highly appealing side as the folk-driven black metal is tinged with nice symphonics to complete an engaging overall atmosphere that captures the epic spirit involved in the conceptual storyline running throughout the album. Given that this epic splendor results in the vast majority of the album containing a rousing, bombastic feel throughout this is played at a bouncy, up-tempo pace that perfectly suits the album’s given themes and manages to give this a strong, stylish and engaging tone that makes for a really enjoyable listen. The biggest issue here is that the album tends to come off rather stuffed and full, especially in the later half where it’s simply more of the same being presented here since this one doesn’t really offer up too much all that different from the vast majority of the other tracks here which means that the album runs together and becomes hard to distinguish from itself quite easily. However, this isn’t that big of a detriment with all the enjoyable material present elsewhere.

Although it’s a little bit longer than what it really should be, the fact that there’s far more to enjoy about this one with its strong mixture of raging folk tunes and fiery black metal rhythms makes this one a fine choice for aficionados of folk-influenced black metal or this type of material in general.

Does it sound good? Order it from here:
https://valfreya1.bandcamp.com/
Posted by slayrrr666 at 12:25 PM