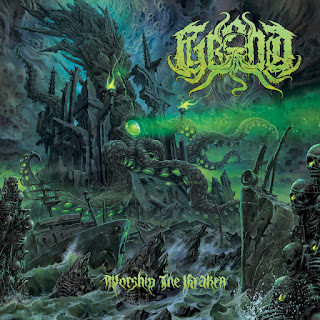 Stepping furthering into the abyss, Russian death metal horde Grond have taken the H.P. Lovecraft influences both in their sound as well as lyrical matters as these influx of elements into their old-school death metal format turns into a far more dangerous entity than before. Following up the EP release the year before and being the last output as a three-piece outfit, the groups’ sophomore effort was released July 1, 2016 on Xtreem Music.

Considering the bands’ influences, this one comes as no surprise what to expect throughout here with this one really exploring these to it’s fullest extent. Opening up immediately with the churning, deep grooves of the Swedish-style scene with the swirling patterns charging in the mid-tempo realms with a series of blistering patterns in tight, controlled measures. It makes for a wholly aggressive time here with the album’s main rhythms carrying the film along through the atmospheric sections, and with the balancing act carried out here by going for the straightforward, simplistic chug style of riffing there’s the ever-present balance of intensity and aggression with more restrained and controlled setups. In the end, though, that mid-tempo churn ends up being the album’s main downfall. The preponderance of thick, atmospheric riffing that’s present here doesn’t sound in the slightest bit interesting at a slower level as the deceleration into doom-like tempos comes off as entirely draining on the experience as a whole as the counter to the lively mid-tempo elements offer a far less involved sense of energy. It comes off without all the same energy and ruthless intensity in these sections which manages to hold off the best sections of the album into spurts that are enjoyable when they appear but still doesn’t come off with the interest level it really should. It’s where the album stumbles, and is what keeps it down.

Does it sound good? Order it from here:
https://grond.bandcamp.com/album/worship-the-kraken-2016
Posted by slayrrr666 at 11:00 AM