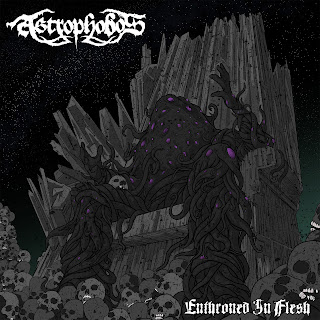 Never one to rush through a release, Swedish black metallers Astrophobos have long been built on their willingness to contribute their full will to their work by taking plenty of time to hone and fine-tune their craft without rushing anything out under their name. After a two-year break from their debut full-length that shows Fredrik Widigs as a session drummer, their new EP was released August 26, 2016 on Triumvirate Records.

As was apparent on their previous efforts, the band is simply out tackling the same fertile and explosive grounds that was laid down back in mid-90s Norway. Firing off those ever-familiar swirling tremolo-picked rhythms and smoldering, brimstone-accented riffing that packs a punch with fiery, dynamic patterns and galloping up-tempo paces with plenty of fervor and enthusiasm, tackling the expected arrangements and tone effectively throughout here. This is pretty much the main guise of the effort which keeps this running short and to-the-point throughout here until it gets to the epic closer, which nicely switches this up into a far more complex and sweeping series of arrangements with the extra running time allowing for the different variances to be present through here to counteract the more traditional elements. That, in a nutshell, is the album’s main problem in that it’s just way too familiar and similar to most other second-wave black metal elements, as it’s the same general tremolo riffing backed by blasting drum-work that’s become quite commonplace throughout here. It’s really the biggest issue against this as despite the short length there’s not a whole lot really wrong with it.

With a lot of high-quality work and no real down-spots other than the overly-familiar and similar rhythms here as part of their old-school homage, there’s more than enough to really get into this one and makes for quite a worthwhile choice of second-wave aficionados or fans of the bands’ previous works.

Does it sound good? Order it from here:
https://astrophobos.bandcamp.com/album/enthroned-in-flesh
Posted by slayrrr666 at 12:30 PM