Guttural Corpora Cavernosa - You Should Have Died When I Killed You 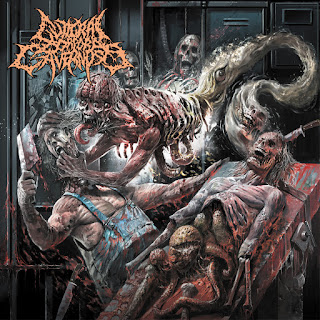 Artist: Guttural Corpora Cavernosa
Release Title: You Should Have Died When I Killed You
Year: 2016
Label: Gore House Productions
Genre: Brutal/Slam Death Metal
Tracklisting:
1. Blood Has Been Spilt
2. See You in Disneyland
3. Remorse for What
4. I Want to See the Light Leave Your Eyes
5. Does He Twitch and Jerk?
6. Anyway, I Had a Good Time
7. There Is No Remedy for It
8. They Would Wiggle and Squirm
9. Crazy World. Lot of Smells.
10. If Anybody Says Their Facelift Doesn't Hurt, They're Lying
11. You Should Have Died When I Killed You

Coming back into action, Taiwanese slammers Guttural Corpora Cavernosa brings their trademark sense of professionalism and general competence when it comes to the genre yet offers a slightly more impressive bent on the material than last time. Having spent the four-year gap obviously honing and fine-tuning their material, the bands’ sophomore effort was released July 8, 2016 on Gore House Productions.

Perfectly capturing the intensity and savagery of the style, the band immediately gets their main influences out in full accordance with the style. Rife with deep, thick riffing full of wet slams and heavy-hitting rhythms that are full of the slowed, simplistic style of the genre as this riff-work comes off with the same type of mid-tempo groove favored throughout here. It’s tight, vicious and quite intense for the most part here as the thick riffs and pummeling rhythms carry this one along quite decently when it wants to here. As simple-minded as it seems, the fact that it still manages to capture the necessary brutality in the riffing thumping along to ferocious slam patterns pummeling throughout here which does get quite enjoyable. While this approach doesn’t make for a bad approach, there’s a singular underriding flaw in this which comes off as way too formulaic and simple-minded than it really needs to be. For the most part, there’s so little changed from the common-ground attack utilized in the genre that it’s not only difficult to pick out what tracks are playing but also distinguishing the band from others in the genre as this one doesn’t leave all that much to chance here simply going through thick slams without really changing up much throughout here. It’s compounded by the fact that this one has such a dreary pace for much of it’s running time that the dull tempos only enhance the rather lagging approach to this one, leaving it quite unremarkable here.

While there’s some solid and at times engaging work here, the utterly bland tempos and an overall majority of rather familiar work to be found here makes this one quite a problematic affair to behold and really only makes this one a pick only for slammer completists or the undiscerning brutal death fanatic.

Does it sound good? Order it from here:
https://gorehouseproductions.bandcamp.com/album/you-should-have-died-when-i-killed-you
Posted by slayrrr666 at 12:07 PM