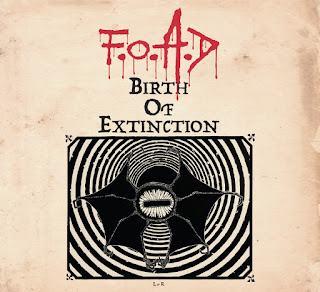 Initially formed back in the 1980s, Swedish thrashers F.O.A.D. existed in various forms until 2012 when the bands’ line-up solidified and the group was able to finally release their first song before proper demo material arrived several years later. Recorded as a three-piece before being joined by second guitarist Steffan Johansson, the groups’ full-length demo bolstered by their demos was originally released November 25, 2016 on Defense Records.

Being conceived in the original birth of the genre, there’s quite a lot of rather impressive old-school moments on display throughout this one. This readily employs fiery, frantic thrash riffing and charging patterns sweeping along at generous, dynamic patterns full of vicious thrash that rips out tight, energetic rhythms that are full of a dark, decrepit atmosphere straight from the genre’s early days. Keeping the ravenous work in check is a series of more mid-tempo and crunchy style of riffing that enables for a still-intense if slightly more melodic series of rhythm patterns that lets the riff-work breathe a little more and opening up a nice variation for the material to not remain strictly one-dimensional which besets the album’s single biggest qualm. The album isn’t really that distinguished by a great deal of innovative and memorable moments as the vast majority of the album rips through its blend of fiery arrangements that are competently pulled off and executed but don’t have much else going for them. There are points where it dips into the familiar quite too often to dole out the violence, and it doesn’t really handle the kind of impact it really should. Likewise, the fact that this one comes complete with demo recordings that are quite obviously of a lower quality and taken from a different recording session yet is passed off as a full-length makes for a jarring and nonsensical feel which causes this to stick out rather sharply. Overall, though, considering it’s a debut it’s not too much of a detriment.

Overall not all that terrible of a release and certainly one with its fair share of positives, the fact that there’s quite a lot to really like with the influx of old-school rhythms and arrangements, no matter how cliche and familiar they may be, make for a nice addition to any old-school thrash fan in particular.

Does it sound good? Order it from here:
http://mythrone.8merch.com/services/store
Posted by slayrrr666 at 11:54 AM