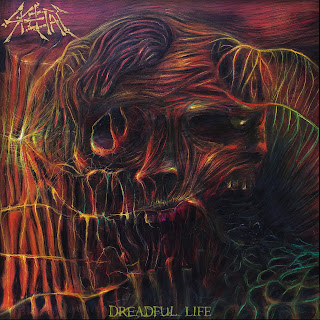 Formed back in 2007, Finnish death metallers Skeletal emerged from the underground to once again spread the classic, old-school approach to the genre which makes for yet another band in the crowded field of European revivalist death metal bands. With the band slowly and surely getting better with each release, the groups’ debut full-length was released February 2, 2017 on Inverse Records.

Immediately out of the gate, the band attempts to display their love of classic and old-school death metal with a churning, frantic sonic attack that’s quite boisterous and dynamic. There’s a blistering, fiery sense of old-school elements present throughout here with the album generally bouncing along to feverish, frantic tempos that bring along most of the absolutely engaging moments within this one. Coupled with the fact that the majority of tracks feature blistering thrash-style riff-work and dark, sprawling rhythms alongside those sparkling tremolo-picked accents, altogether these elements help with the old-school feel while also managing to be such enjoyable patterns and arrangements that they’re immensely enjoyable on their own. When this drops into more relaxed territory, there’s a shift away from the thrashing energies into a more tight, mid-tempo crunch that offers a steadier influence on their pacing which makes for a striking and enjoyable companion piece of material which isn’t far removed from the ravenous and thrashing earlier material and changes it up just enough to get some wholly enjoyable work thrown in as a result which is what makes for a great time overall here. The only place it stumbles is the rather weak, plodding piece that just doesn’t offer up much here and seems like it’s out-of-place with the material as a whole which does lower this one slightly. Otherwise, this one is such a fun and engaging old-school style release.

Filled with a lot of rather engaging and enjoyable positives throughout here, there’s plenty to like about this which is surprisingly heavy and vibrant for a debut release which makes this one a particularly strong and worthwhile offering for all fans into revivalist or simply old-school death in general.

Does it sound good? Order it from here:
http://www.inverse.fi/shop/catalog/product_info.php?products_id=623
Posted by slayrrr666 at 10:58 AM