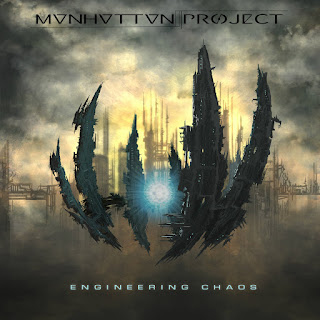 Formed in 2013, Greek progressive metallers The Manhattan Project have brought a fine fusion of progressive, symphonic and djent material to the table with some startling technical ability to enhance their modernistic approach. Refining and honing their sound over the intervening years, the group finally prepares it’s debut full-length album that was self-released on December 9, 2016.

On the whole, the album here is mostly based on a strong central framework of tight, technically-challenging progressive rhythms. Loaded with sterling displays of complex, challenging riff-work that offers grand sweeping displays of styles ranging from shredding virtuoso leads to deep, churning grooves and even blistering djent rhythms that are incredibly dynamic in range as well as feverish intensity, the guitar-work on display offers plenty of great and worthwhile moments. With the album favoring to pair these elements alongside pounding drumming and rather fine bass-work to shore up the heavy-hitting aspects here, there’s plenty to like here with the main approach before it gets to the biggest highlight in its outstanding keyboard work. Featuring plenty of grandiose, cinematic-style material that’s exceptionally impressive by adding an additional layer to the remaining parts of the material and coming off with a fine fusion-style of djent, prog and orchestral styles that mixes together exceptionally well. The album does seem to run into a problem of coming across way too stagnant and mechanical at times with it’s rather one-note sound being frequently the target of overly-familiar and commonly-used patterns that makes the album a clone of itself far too often. For a debut effort, though, that’s not as big of an issue as it could’ve been.

While featuring a few minor problems with the overall familiar approach of the material, the group is nonetheless off to a solid start in the genre with a rather enjoyable offering that puts up enough to really like for fans of the more modern djent or progressive sounds who are encouraged to check them out while all others should heed caution.

Does it sound good? Order it from here:
https://manhattanprojectbandofficial.bandcamp.com/album/engineering-chaos
Posted by slayrrr666 at 1:39 PM