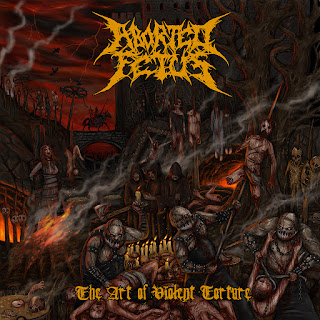 Continuing to charge ahead with full force, Russian brutal death metallers Aborted Fetus have brought their ugly, pummeling brand of old-school and brutal death sounds into a rampaging force that highlights one of the finest collections of brutality in the scene. With a five-year gap between releases, the group finally releases its fourth true full-length effort April 28, 2017 on Comatose Music.

Once this gets started, it becomes obvious that there’s yet another dynamic stand-out offering of tight, rapid brutal death metal on display here. The vast majority of tracks display rabid, feverish riffing full of deep, churning razorwire riffing that’s kept to a locked-tight, controlled onslaught that handles a nice variety of material. Ranging from churning chugs to mid-tempo grooves and even unleashing a few slams and more traditional structures into the proceedings, this manages to unleash a rather frantic burst of material while setting up the more deep, guttural-sounding cuts elsewhere on here. These range from slow, sprawling sections full of blastbeats and more straightforward churning riffing that offers far more stagnant and start/stop patterns into the rhythms to offer a  complete brutal outlook even if the album as a whole does have a few minor issues spring up from this outcome. The main issue here is the utter lack of ability to distinguish what’s going on for long stretches of the album with the inability to really tell what track is playing as the band doesn’t really distinguish itself all that often. The fact that the tracks are all roughly the same length is a big part of that as there’s very little chance for the album to really bring a lot of disparate elements to separate the album a little better. Likewise, the need for three barely minute-long interludes is a little unnecessary as they split up the pacing too much and really doesn’t need that many breaks in an album this short. Otherwise, there’s a lot to like here with its frenetic approach.

Featuring a lot of rather enjoyable elements that bring out some really great brutal moments here, there’s not a whole lot really wrong here beyond the lack of identity in the tracks so there’s enough to work with here for fans of the bands’ previous work or simply brutal death metal in general.