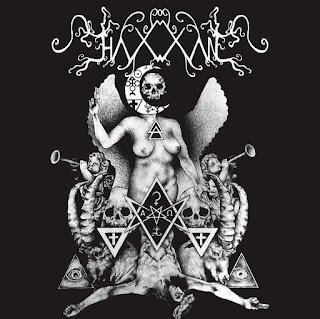 Formed in 2011, Ohio-based black metallers Haxxan came together from scene veteran Killjoy DeSade’s desire to offer a more traditionally-based old-school black metal attack that gets fleshed out into a stellar outlining of Aleister Crowley’s life. Bringing together a crop of fine musicians into a fully-fledged unit, the group prepares its full-length debut December 2, 2016 with a second vinyl pressing February 17, 2017 on Hell’s Headbanger Records.

Taking its cues back from the genre’s start, this here is quite an adept and wholly enjoyable offering taking on the simplistic nature of early black metal. This one is reliant much more on simple riffing chords and structures which take on the heavier aspects of the genre far more than they do the swirling tremolo-picked rhythms, featuring a heavy take on those plodding, doom-like sprawls than anything else. As well, the inclusion of fiery, more energetic rhythms compared to the swirling mid-tempo efforts throughout the rest of this one and offers a slightly more varied approach within here. This creates the feeling of plodding, oppressive doom with the simple patterns and riff-work that charges along quite nicely with the riffing coming along rather well with the use of ethereal, atmospheric keyboards to complete the picture in terms of generating the tight, churning atmosphere in this one. That the majority of these tracks are placed in the second half here is where this one falters somewhat, as despite the competence and professionalism of the performances of all involved the fact remains that this one doesn’t flow together smoothly in terms of running order, starting slowly and then building up to a cohesive if still odd pairing since it’s all joined together rather than spread out. Given that this is the main issue, there’s not a whole lot to dislike here.

Without a whole lot of really important flaws even if they are noticeable in the end, this one comes off rather nicely for a debut offering which is no surprise given the talent involved and makes this one quite a solid offering for those who follow the creative side involved or are fans of the more simplistic brand of old-school black metal.

Does it sound good? Order it from here:
https://haxxan-ohio.bandcamp.com/
Posted by slayrrr666 at 11:09 AM