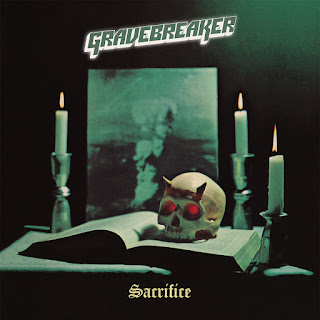 Formed back in 2011, Swedish heavy metallers Gravebreaker has taken their time perfecting and honing a stylistic homage to the classic, blazing old-school heavy metal that makes up their overall approach as they’ve gone about building this love affair to the style. Finally, at the point of getting to their debut release, the power trio originally self-released the effort August 22, 2016 before a vinyl reissue December 16, 2016 on Gates of Hell Records.

Given their pedigree, the bands’ infectious approach to the genres’ old-school tendencies is given quite a prominent display on here. Graced with plenty of tight, chugging riffing swirling around the ravenous melodies driving along throughout the efforts, their mid-tempo charge lets the appropriately simplistic riff-work and clubbing drumming bounce along quite energetically to these rhythms in fine fashion. When they get balanced along by the addition of stellar keyboard melodies, this becomes all the more stylistically and enjoyably more 80s-inspired affairs building that classical level of melody alongside the generally metallic riffing that continually charges throughout here. There’s a few rather noticeable factors against this, though, which namely comes from the albums’ incredibly weak and punchless production which tends to hold this one down to nearly unlistenable levels. The guitars just lifelessly swirl around throughout the mix, getting lost in the rumbling bass-lines, battering drumming and high-pitched, gravelly vocals that drown out the riffing it comes off so light. Likewise, it tends to drain a lot of life from the album during the middle sections where it’s more mid-tempo cruisers in terms of tempo rather than just going for the most energetic and engaging efforts elsewhere, causing this to dip into some bland efforts during that section which holds it up. The fact that it’s so adept at homaging the past that it really doesn’t come off really original at all, and it’s obvious about it, which hold it down.

Despite filling itself up with some rather prominent and noticeable flaws, the fact that there’s some good stuff to enjoy about the reasonably energetic affairs here which does get a pass with this being a debut album that overall makes this one worthwhile only for the most devout fans of old-school classic metal genre only.


Does it sound good? Order it from here:
https://gravebreaker.bandcamp.com/
Posted by slayrrr666 at 12:51 PM