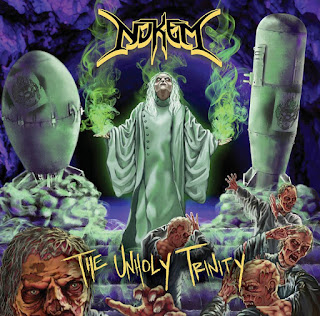 Formed just in 2012, Southern California thrashers Nukem has been hitting it hard on the live front as the veteran group brings their seasoned experience to bear on their classic sound into a driving, honest thrash attack that showcases those elements quite fully. Finally making it to their first professional release, the groups’ debut effort was released September 16, 2016 on Sleaszy Rider Records.

Using their experience to the fullest, there’s an utterly ripping and devastating old-school charge throughout this one that makes for a thrilling experience. Frantically blasting away with reckless intention, the group immediately charges through a whirlwind of utterly tight and ferocious thrash rhythms that manages to include a flurry of Bay Area-inspired riff-work that focuses on all manner of tempos and patterns here. This one goes from raging full-throttle barnburners full of blistering drum work alongside the reckless riffing that packs in tons of wild chaotic soloing and frenzied rhythms, drops down into stuttering mid-tempo charges that still blitz along at a fine clip and then features solid melodic interludes spliced among its more engaging elements to leave this one with a respectful usage of older thrash songwriting structures which adds to the engaging appreciation for the old-school featured throughout here. The only thing that stumbles this one up slightly is the album’s inclusion of the two cover tracks which aren’t so bad taken out of context and enjoyed on their own, but the fact that they hold up the running time here to give the group less of a chance to make a mark is a slight disappointment given that there’s so much to like when they do make that impression. As well, there’s the little instrumental break that comes just before the album finishes up which is a rather odd placing and one that doesn’t seem to need to be there much less placed in that order in the album. Overall, though, these here aren’t in the slightest bit detrimental against the enjoyable elements present here.

With some minor issues and a boatload of surprisingly effective positives featured throughout here, this one offers up a rather interesting and impressive amount of good work here that will serve them well in their career and makes this a solid choice for fans of old-school thrash or revivalist fans in general.

Does it sound good? Order it from here:
http://nukem.bigcartel.com/
Posted by slayrrr666 at 1:00 PM