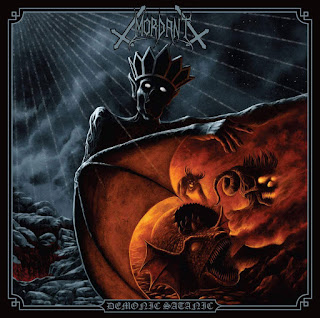 Still blazing in the underground, the long-running Swedish black/death metallers under the name Mordant continue to utilize the work on their country’s history and heritage in making this one of the most ferocious yet melodic albums in the scene. Finally coming back after a five-year break from releases, the group finally prepares it’s third full-length effort released November 30, 2016 on To the Death Records.

From the outset, the band manages to employ a quite adept and profound usage of old-school death and black metal into this one that’s incredibly appealing. As the vast majority of the tracks showcase, there’s quite a heavy usage of ferocious, brimstone-accented tremolo riffing that tracks through the fiery tempos and thrash-like energies commonly utilized which makes for some ripping, energetic efforts. The dirty thrashing style here comes across quite nicely with the album’s solid shifts into more traditionally-picked tremolo lead-work and straightforward rhythms that tackle the stylistic energies from the death metal scene. When these rhythms are featured alongside the brimming melodies and pounding rhythm section, there’s plenty to like with this one even though it does point out a rather small problem with this one in being so overly reliant on the old-school tone and mindset in how they organize their riffing that it really loses its identity. No matter how energetic or vibrant the material is, there’s always the sense that this has been done before and utilized to better effect as the short, compact writing does tend to take out some of the sting of these tracks to a somewhat more pronounced degree than expected. It’s not enough to totally lower this one but it does affect it enough.

Given that there are some minor flaws here even with a ton of rather impressive elements, this one becomes quite an enjoyable and impressive outing that will really appeal to the less discerning fans of old-school Swedish black/death metal or those that prioritize those enjoyable elements over its minor drawbacks.


Does it sound good? Order it from here:
https://tothedeathrecords.bandcamp.com/album/demonic-satanic
Posted by slayrrr666 at 12:14 PM