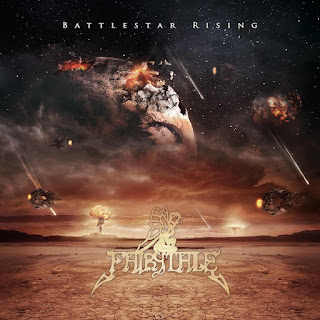 Heading deeper into the cosmos, German heavy/power metallers Fairytale have continued to propel their futuristic sound through a variety of strong, energetic work amongst the live scene that has supplanted their melodic sounds against the science fiction-heavy lyrics detail. Finally coming back into action after five years, the groups’ sophomore effort was released February 24, 2017 on Art Gates Records.

Furthering their sound into tighter, more mature realms, there’s still plenty of the bands’ familiar elements present here as this one utilizes those elements quite well. There’s plenty of stellar trademarked blend of fiery riffing and plenty of vibrant, energetic melodies coming out in full-force all wrapped together with the swirling power metal rhythms running throughout here which is quite an effective launching pad for this one. Utilizing these bright rhythms and melodies for the vast majority of the album manages to work incredibly well at keeping this one up-tempo and lively with the tight power metal chugging riff-structures keeping this one built around a highly engaging framework for tacking on the melodic outbursts that also are featured throughout here. When the band shifts away from this style, this opts for for a series of simplistic one-note chugging styles that show off their material in a less-than-enthusiastic outpouring that really doesn’t offer up much of an enjoyable setting since these are far more lethargic and plodding with the melodic lines straining to mesh with the similarly-plodding chug riffing alongside these rhythms and the whole affair seems to crash down during these times with the lack of energy. Likewise, that becomes even more of an issue with the overlong running order that features a few too many filler tracks to really stretch this one out, and it can lead to a somewhat draining experience when listened to as a whole. It’s still good enough even with these issues, though.

Although there are some minor issues to be had here, the fact that there’s still more than enough to really enjoy here makes this one quite a solid enough offering for die-hard fans of science fiction-themed power metal or this style of heavy/power metal while those that don’t appreciate such flaws should heed caution.


Does it sound good? Order it from here:
http://www.artgatesrecords.com/store/index.php?id_product=47&controller=product&id_lang=5
Posted by slayrrr666 at 12:38 PM